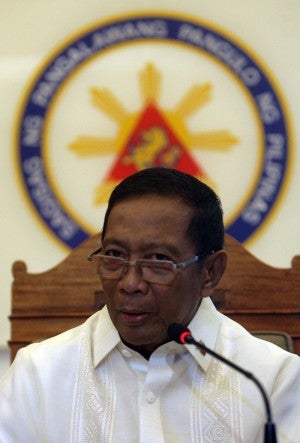 MANILA, Philippines–Even in far, far Cagayan, Vice President Jejomar Binay was hounded Monday by questions about the allegations of corruption thrown at him by his former political lieutenants in Makati City.

Binay was supposed to be in Manila defending himself against those charges in an address to the nation that his aides had said would be “emotional, heartfelt and presidential in tone.”

But Typhoon “Luis” (international name: Kalmaegi) slammed into northeastern Luzon with powerful winds on Sunday night and with President Aquino away on a tour of Europe and the United States, the Vice President had to take his place and see how bad the damage was.

So Binay canceled his speech, which he had scheduled for

The Vice President said he would announce later when he would deliver the speech.

Binay toured the typhoon-hit towns of Peñablanca, Iguig, Amulung and Alcala in Cagayan province and proceeded to his mother’s hometown of Cauayan in Isabela province, which was also struck by Luis as it made landfall.

The Vice President said he was glad that the damage in Cagayan was minimal, which he attributed to preparations made by the local government.

Asked why he chose to come to Cagayan and Isabela when Luis hit 19 other provinces, Binay said the two provinces were under typhoon signal No. 3.

The visit to Isabela was a sort of homecoming. Binay said he was from the town of Cabagan and that he was Ibanag.

“We are Ibanag and I speak Ibanag,” Binay said.

Asked about former Makati Vice Mayor Ernesto Mercado’s allegation that he took 13 percent of all infrastructure projects when he was mayor of Makati, Binay replied, “That will be among the things I will answer [in my speech].”

When asked if he would go to the Senate inquiry into the alleged overpricing of the 11-story, P2.28-billion Makati City Hall Building II, Binay said he was still thinking about it.

The Senate blue ribbon subcommittee looking into the scandal has sent an invitation to Binay to come to the next hearing to shed light on the controversy.

In a letter to Binay dated Sept. 11, Sen. Aquilino Pimentel III, chair of the subcommittee, “requested” the Vice President to come to the hearing on Sept. 25 “to inform the committee about what you know” about the construction of the parking building.

But as it was an invitation and not a subpoena, Binay may choose to ignore it.

Pimentel said he was not inclined to even suggest that the Senate compel the Vice President to appear in the inquiry by sending him a subpoena.

Senate President Franklin Drilon said he would not issue a subpoena for Binay if one was sought.

“As a matter of respect, I will not issue a subpoena. Respect for the office. . . The invitation has been issued. It’s up to him to consider it,” Drilon told reporters.

To speak later this week

Binay was scheduled to return to Manila by land early Tuesday, according to his spokesman, Cavite Gov. Jonvic Remulla.

“The Vice President said his speech could wait, but not the typhoon victims,” Remulla said, adding that Binay was “vacillating” on Sunday night about proceeding with the speech when news reports were saying that many parts of Luzon were getting whipped by strong typhoon winds.

Remulla said Binay decided to visit typhoon victims because President Aquino was traveling abroad and “someone had to take charge.”

“The Vice President thinks that while there is an appropriate time to respond to the issues, the need to alleviate the suffering of typhoon survivors cannot wait. The Vice President wants to reassure the people of Cagayan and Isabela that their government is ready to assist them,” Remulla said.

The Office of the Vice President said Binay’s speech had been moved to later this week.

Remulla said Binay may speak either Wednesday or Thursday.

Binay has denied that the parking building, which was built when he was mayor of Makati, is overpriced.

He has said that Mercado and other former Makati officials who have leveled the charges against him and his family are maligning him to eliminate him from the 2016 presidential election.

Binay, who declared that he would run for the presidency right after his election to the vice presidency in 2010, is the front-runner in early presidential opinion polls.

Testifying in the Senate inquiry last week, Mercado said he delivered cash in large bags to Binay, his wife and children and that money, amounting to millions of pesos, was kickback from the city government’s infrastructure projects.

Mercado alleged that Binay got 13 percent of the cost of every project and that some of the money went to Binay’s vice presidential campaign in 2010.

Mario Hechanova, former chief of the city government’s general services division, testified that he rigged biddings for project contracts on instructions from Binay, who wanted the projects to go to favored contractors.

Binay blamed the mess on politics, but Pimentel said on Sunday that anything the Vice President said through the press would carry less weight in the subcommittee’s evaluation than statements made under oath.

On Monday, Pimentel said he had asked that subpoenas be issued for Makati Mayor Jejomar Erwin Binay, Ebeng Baloloy and Gerry Limlingan, all of whom Mercado claimed received the bags containing kickbacks for Binay.

The three have been directed to appear in the Sept. 25 hearing.

Pimentel said that if Binay would come to the hearing, he would ask the witnesses and the resource persons to give way so that the entire session could be devoted to the Vice President’s testimony.

Sen. Nancy Binay said Monday that her father remained supportive of President Aquino despite the controversy.

She said her father was among the officials who saw the President off at the Ninoy Aquino International Airport on Saturday.

Almost all that the Vice President does is done in support of the President, Senator Binay said.

The senator also said there was a need to review the rules for accepting people into the government’s Witness Protection Program, for which the people’s money is spent.

The witnesses against the Vice President have been accepted into the program.