The speechless find their voice 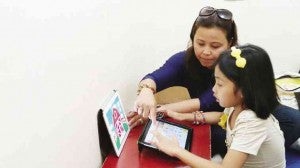 LABELING animals is fun and undaunting with the use of an electronic tablet.

Six years ago when speech-language pathologist Terese Jimenez-Manalansan started teaching at a school for children with special needs in New Jersey, most of the students could not verbally communicate.

Manalansan told her superiors at Middlesex Regional Educational Services Commission (MRESC), which was then using sign language and pictures, “There are different ways. We can use technology.”

Initially met with resistance, Manalansan said, she offered to train all the teachers and therapists in the use of electronic devices as communication aids.

Through her initiative, 95 percent of the students learned to express their feelings, wants and needs.

Now, she hopes to have the same impact in the Philippines through the pilot project Tinig AAC. (“Tinig” is Filipino for “voice” and AAC stands for augmentative and alternative communication.)

With the Philippine Association of Speech Pathologists (PASP) and the University of the Philippines College of Allied Medical Professions (UP CAMP), Manalansan has developed a

10-month distance learning program on the use of communication aids in speech therapy.

The pilot project has recruited as participants two private clinicians and five faculty members of the three universities offering speech pathology, namely, UP, De La Salle University and the University of Santo Tomas.

The launch of more affordable computer tablets in the market encouraged Manalansan to push through with the Tinig AAC project.

Seven speech-impaired Filipinos have been chosen for the program. Each has received an iPad installed with a special speech and language application.

One of the recipients is Francesca Mae M. Revil, a seven-year-old who has been diagnosed with global developmental delay and mild cerebral palsy.

Due to her limited fine motor skills, modifications, such as the installation of keyguards, had to be made to allow her to point and touch pictures on the screen. 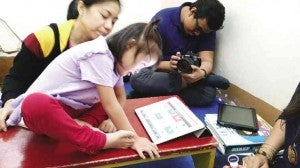 A GIRL with special needs picks a toy from pictures on the iPad and tells clinic director Marie Chris Palafox-Pascua.

Revil’s iPad is mounted on a wheelchair donated by Latter-day Saints Charities so she can access it without anyone having to hold it for her.

Manalansan said the best way to help a patient was to believe in his or her capability to learn, even when the signs said otherwise.

Manalansan said the iPad recipients were quick to adapt to their new speech-generating devices.

“In 15 minutes, all the nonverbal kids were doing exercises,” she said. “They have been doing therapy for years but in 15 minutes, they got it.”

With the help of an iPad, Manalansan said, speech patients can begin to verbalize the words they hear. When the word “apple” is pressed, for instance, a digital voice will say “apple.”

One touch can open a folder with an infinite number of words for forming sentences. The software reads aloud selected words and phrases.

By touching or tapping icons on the iPad, people with communication disabilities can engage in conversation.

In some cases, the iPad has reduced tantrums, aggression and self-injurious behavior among children because the device allows them to channel their thoughts and emotions. 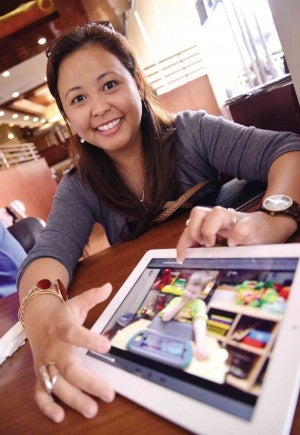 FOR MANALANSAN, an app a day keeps the speech blues away for young special learners. AUGUST DELA CRUZ

Some patients who seemed “cognitively low” turned out to be smart after being given the right tool to connect with others.

“The Philippines is full of children with disabilities who are smart and full of potential,” she said, citing as an example Brina Kei Maxino, the first Filipino girl and first teenager with Down syndrome to represent Asia at the Special Olympics Global Youth Activation Summit.

Maxino, who was praised by US President Barack Obama in a recent gathering at the White House, was Manalansan’s first patient.

A patient’s success, she said, depended on the therapist’s ability and patience to find useful tools and techniques.

She found that advanced AAC intervention was almost nonexistent in the Philippines.

“Talking to my colleagues, their intervention for nonverbal children was the same as it was 14 years ago [when I left the country],” she said.

While there had been attempts to use modern devices, local speech pathologists could not execute the intervention competently due to lack of mentorship from a specialist, said Manalansan, who is a MRESC AAC evaluator.

With the help of PASP president Dr. Ferdiliza Garcia and UP CAMP’s Jennifer Soriano, Manalansan has created a long-distance program that will allow her to mentor local speech language pathologists.

Classes will be held at UP Manila for three hours every Saturday via Skype.

Manalansan said sessions would be videotaped and presented for classroom discussion so “they can learn from their experiences.” 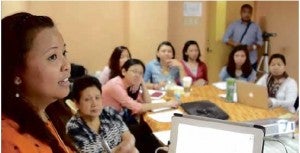 Through the program, Manalansan hopes to foster a “culture” of mentorship where senior speech pathologists will mentor juniors.

After three years of the program, she is confident that the first group will be ready to mentor other therapists.

Manalansan said she would visit every August for face-to-face lectures.

Participants will monitor the progress of the iPad recipients. The state university will give certificates of attendance to the participants.

This year, Manalansan raised the funds for the iPads with the help of family and friends in the United States.

“We hope we can tap into local associations to sponsor future recipients,” she said.