Bidder tells how he was trapped in Makati City Hall elevator

MANILA, Philippines–A supplier of rescue equipment on Thursday surfaced to say he was the bidder trapped in Makati City Hall’s elevator when he tried to win the deal for the supply 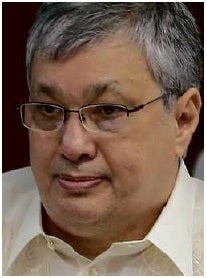 ONE HOUR AND TWO MINUTES IN LIMBO Marcial Lichauco, general manager of 911 Alarm Inc., supplier of fire-fighting equipment since 1995, says he was the bidder who was trapped in an elevator at Makati City Hall, resulting in his firm not being able to submit bid documents to the bids and awards committee on time. RAFFY LERMA

Marcial Lichauco Jr., president of 911 Alarm Inc., said his experience was worse than described earlier because he was trapped for over an hour, and not 20 minutes.

Lichauco appeared at the hearing of a Senate blue ribbon subcommittee to corroborate the earlier statement of former Makati general services head Mario Hechanova, who said procurement officials had caused a potential supplier for fire-fighting equipment to be trapped in the elevator so that he would be late for the bidding.

Hechanova alleged that the officials made sure the bidder would be late so that the contract would be won by a friend of then Makati Councilor Jejomar Erwin “Junjun” Binay. He also alleged that other contracts in Makati were rigged for favored suppliers.

The contract for fire-fighting equipment was won by Alexandrite Blue Inc., the qualification of which Lichauco earlier questioned.

Lichauco said Hechanova’s Senate testimony was very similar to what happened to him at Makati City Hall seven years ago.

“I would like to confirm that the incident described by engineer Hechanova in his testimony happened to us on May 15, 2007,” he told the blue ribbon subcommittte investigating the alleged overpricing of the Makati City Hall Building II.

He said he and other officers arrived at Makati City Hall at 12:53 p.m. for the 2 p.m. bidding. At that time, only two of the city hall’s six elevators were working and the others were said to be under maintenance.

His group entered Elevator B to go to the ninth floor where the bidding would be held and it got stuck somewhere near the seventh floor.

“Makati City Hall personnel were not able to get passengers out of the elevator until around 1:55 p.m., after lowering the elevator back to the ground floor,” he said.

He and his group arrived at the bidding office to submit bids at 2:02 p.m., accompanied by Makati rescue and clinic personnel.

In all, they were trapped in the elevator for one hour and two minutes.

“The elevator was full, very full and after being trapped for a while, breathing became difficult,” he said.

Lichauco said it took a long time for Makati rescue personnel to come to their aid that he had to call his own company’s 24-hour monitoring center via cell phone so that they could get in touch with Makati rescue to relay their distress.

Lichauco also said the woman who was with him and whom Hechanova identified as his mother was actually the head of sales of 911 Alarm.

He said Hechanova might have mistaken her for his mother because she had to go to the clinic for having difficulty breathing after the elevator ordeal, and was brought to the bidding in a wheelchair.

Lichauco belongs to a prominent clan whose father was the first Filipino graduate of Harvard Law School.

His mother, Jessie Lichauco, is a well-known community leader in Sta. Ana, Manila.

Lichauco also said he filed a motion for reconsideration with the bids and awards committee (BAC) and with then Makati Mayor Jejomar Binay to reconsider their two-minute late bid.

He also submitted a motion questioning the eligibility of the winning bidder, Alexandrite Blue Inc.

Lichauco, who has been in the business since 1995, said he had never heard of Alexandrite Blue before it won the bidding. He noted that the industry of supplying rescue and fire-fighting equipment was a small one.

He also said that when he decided to bid for the Makati project, he said his people were told they could not immediately get bidding documents. They were told to go through a registration process first.

He said the company raised the issue with the BAC, saying this was not consistent with procurement laws that say bid documents must be complete and available.

His company also attended the prebid conference and questioned the lack of technical specifications for the items being sought. They were subsequently given brochures for specific products.

Sen. Alan Peter Cayetano, who invited Lichauco to the hearing, said the Commission on Audit should look into the accreditation requirements of some local governments.

“Apparently, despite national laws and procurement laws, there are some government entities that pass their own additional accreditation process, but it really is a mechanism to disqualify those they do not want to win in the bid,” Cayetano said.