‘Binay got 13% for each deal’ | Inquirer News
Close
menu
search

MANILA, Philippines–Three locked duffel bags labeled “J,” “G” and “E” that each contained bundles of cash worth millions of pesos for the family of then Makati Mayor Jejomar Binay, for his personal needs and for his campaign kitty for the vice presidency in 2010 were delivered by no less than his then Vice Mayor Ernesto Mercado.

Testifying before the Senate, Mercado on Thursday said he personally gave the bags filled with some P1.5 million to P10 million in cash—kickbacks from the city government’s infrastructure projects—to Binay, now the Vice President, and to the latter’s children and staff members.

Mercado said the J bag was for then Councilor Jejomar Erwin “Junjun” Binay, the G bag for his father’s finance officer, Gerry Limlingan, and the E bag for his longtime trusted secretary, Ebeng Baloloy.

The bags also contained the lists of contractors, projects and the amount of money they gave, Mercado said.

Only the recipient of the bags would receive the combination to unlock these bags, via text message from trusted Binay aide and former city engineer Nelson Morales, he added.

The money came from the 13-percent kickbacks that Binay allegedly got from the contracts for the city’s infrastructure projects—not just the P2.3-billion Makati City Hall Building II (parking building), according to Mercado.

Mercado said that he delivered the bags to the home and offices of the then mayor numerous times and that Binay himself was present during some of the deliveries. The then vice mayor became involved in this practice since 2008, when he was announced as the next candidate for Makati mayor.

The Senate blue ribbon subcommittee investigating the alleged overpricing of the Makati parking building has decided to invite former Makati Mayor and now Vice President Binay to its next hearing on Sept. 25.

Mercado said he usually delivered the cash for the Binay family to then Councilor Junjun Binay, handing over the bag in the latter’s 18th floor office, his house on Caong Street, or in the mayor’s office, which he entered through a private door accessible only to a select few.

“The person carrying my bag stops at the door and will put down the bag. I’m the only one who enters the office. If Junjun or Mr. Limlingan is there, I will give them the bags, but the mayor (Vice President Binay) is also there,” he said.

“He (Vice President Binay) knows what the bags contain,” he added. “I will only say, ‘Sir, this is the one for Junjun. Kuya (Limlingan), this is for our campaign.”

During his deliveries to Mayor Binay’s home, Mercado said he would usually go directly to Binay’s library to bring the bag. Binay would tell him to put down the bag and that Junjun would get it later.

Mercado also said part of the money he delivered to Junjun Binay included the monthly P2.4 million in cash for former Makati Mayor Elenita Binay, with the money coming from the city’s garbage contract.

He said he was sure the money from the garbage deal was meant for Elenita because she had warned him not to touch it, after she had supposedly complained of his reduction of the city’s “ghost employees.”

But when Elenita was mayor, which was from 1998 to 2001, Mercado said he also delivered money to her house, which was received by eldest daughter Nancy, who is now a senator.

During Elenita’s term, when he was out of Makati after losing the vice mayoralty to Edu Manzano, Mercado said he had helped her out by checking the documents she handled. He held office at the Makati action center.

Later on, the documents stopped passing through him and he heard rumors that her “amigas” (friends) questioned his role. But he said Elenita at one point called his attention and asked him where her money was going.

“I told her, ‘Ninang, I asked you where I should send your money, and you told me to bring it to your house and give it to Nancy. That’s Senator Nancy,” he said.

He usually asked his staff to deliver the money, but there were times he personally brought the cash himself and gave this to Nancy.

He added that it was a good thing he and Morales kept a logbook of their deliveries, which he showed to Elenita. But this logbook is no longer with him now, since this was back in 1998.

The bags of cash for Binay’s campaign were usually delivered to Limlingan, the mayor’s finance officer then, Mercado said. This was delivered to the second floor of Vistamar Building on Mayapis corner St. Paul Street, or to Binay’s office when Limlingan was there.

“(Limlingan) is the one who talks to the private sector. Some of these funds were set aside for Binay’s campaign for the vice presiden[cy],” he said.

Binay had been aiming to be President since 2001, according to Mercado.

Mercado handed over the money for Binay’s personal needs to “Ate Ebeng,” Binay’s trusted secretary since his lawyer days. Mercado made the delivery to Robelle Mansion on JP Rizal Street in Makati, the office Binay uses for his “private transactions.”

The bag for Ate Ebeng usually contained the smallest amount, while those for the Binay family and for the campaign kitty contained roughly the same amount. 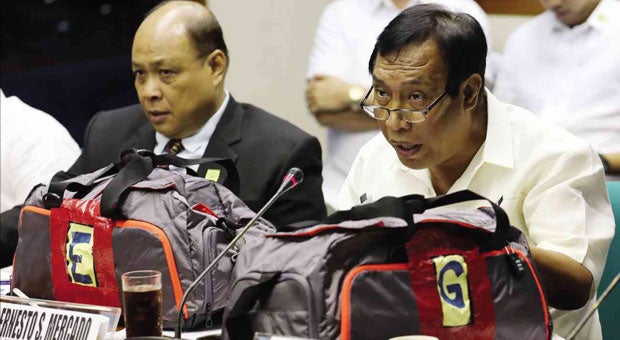 Mercado said he got the bags of money from the late former city engineer Morales, a trusted Binay official, who would call him up whenever the cash was available for delivery.

3 bags for every collection

Morales used the term “bag” or “goods” over the phone when telling him the cash was available and did not use the term money as a precaution in case the phone was bugged, he added.

“For every collection, engineer Morales delivers three bags to my office,” the former vice mayor said, pointing to similar bags labeled “J,” “G,” and “E” that he brought to the hearing.

Each bag has a combination lock and Morales sends the code via text message to whoever would receive the bags, he said.

“When the bags had no lock, the amounts they received were not correct and a portion was missing. I received calls telling me the amount was not correct. So, engineer [Morales] and I decided to have a lock on these so that they would be the ones to open these,” he said.

Asked why he was sure the bags contained money, Mercado said he had been a frequent visitor to Morales’ office.

“I can describe how the money was placed in the bags,” he said.

He added that since the money did not come from one project alone, the bags included a list of the projects from where the money originated.

“It includes which contractor gave the money, what project it came from, and how much was given. That’s why there were different bundles inside, and I saw that. That’s why I am very sure that they contained money,” he said.

He added that Morales would not have put locks on the bags if these contained only dirty laundry.

The deliveries of bags of cash did not take place at regular intervals. These would depend on how many infrastructure projects were taking place in Makati, he said. The amounts would also vary.

“It depends on whether there are many projects being undertaken,” he said.

Mercado also said he could only speak of the kickbacks he delivered for his boss, then mayor and now Vice President Binay. For example, if Phase 1 of the Makati parking building cost P400 million, Binay would have gotten some P52 million or 13 percent, he said.

But he believed other officials also profited from the infrastructure projects, though he had no personal knowledge of this.

Sen. Aquilino Pimentel III asked where the cash came from, whether from the contractor or withheld from City Hall.

Mercado surmised the money came from the contractor, since there was no other source from where Morales could get the money.

Mercado was not left empty-handed for his role. He said Binay and Morales promised him P120 million for the campaign of his party during the 2010 elections, but he got P80 million.

Mercado said the Vice President told Morales to stop giving money to the former vice mayor, since they were already political rivals by then.

Mercado had a falling out with Binay after the latter withdrew support for his election campaign in the mayoral race in Makati.

He said Morales also disclosed that he was directed to raise P1 billion to be used for Binay’s campaign for the vice presidency, for Junjun’s campaign for mayor and for the reelection of Makati Rep. Abigail Binay.

Asked about the Binay camp’s allegation that Mercado, Morales and former general services director Mario Hechanova had formed the “triumvirate of corruption” for rigging the bidding for projects in Makati, Mercado noted that after he and Hechanova had broken away from Binay, Morales stayed with the mayor.

Mercado also said that when he was councilor, he regularly received envelopes of cash containing P10,000 to P70,000, and was told he’d received this as long as he would be a “good boy.”

Only Pimentel, Cayetano and Trillanes were present at Thursday’s hearing. Senator Binay early on said she would inhibit from the hearing out of delicadeza.