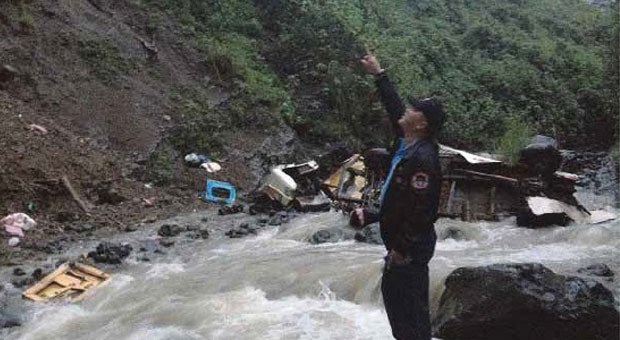 DOOMSDAY IN BUGUIAS A vehicle carrying 15 high school students fell 300 feet into a ravine and landed in a creek on Tuesday killing 12 of the passengers aged 12 to 18, and its driver in Buguias town, Benguet. They were on their way home from school. PHOTO CONTRIBUTED BY BENGUET POLICE OFFICE

On their way home, John Ray’s schoolmates hitched a ride.

It is common in the vegetable-growing community for students to walk to and from school each day on the Buguias-Kabayan Road. Motorists—some of them on their way back from the day’s vegetable deliveries—often give the students a ride to keep them safe.

But Tuesday was not one of those moments.

Dalisdis’ vehicle, carrying 15 students aged 12 to 18, fell into a 100-meter deep ravine at 4:30 p.m. in Sitio (settlement) Bangbangayen, Barangay (village) Poblacion, killing him, his son and 11 others.

Reports from the Buguias police and the Office of Civil Defense (OCD) in the Cordillera region said eight died instantly, including the 45-year-old Dalisdis. Four others, including John Ray, died while being taken to Abatan Lutheran Hospital (ALH) in the town.

Charee Bestre, 15, was taken to Baguio General Hospital and Medical Center in Baguio City (BGHMC) but was transferred to Saint Louis University’s Hospital of Sacred Heart here, where she died early Wednesday.

In Buguias, residents said three other children would have been among the victims had they boarded the jeepney.

“Witnesses said they saw the vehicle of Dalisdis stop for three more children who were walking home, but it stalled. The jeepney then rolled off the road and fell into the ravine,” said Mina Bela-o, a Buguias resident, in a telephone interview on Wednesday.

The accident shocked residents of Buguias, about 50 kilometers from this city, because even bus and jeepney drivers take time to pick up students walking on the road, Bela-o said.

Brillante Madayag, a Land Transportation Office employee, said the practice of motorists accommodating children for their safety was common in upland towns in the Cordillera.

“You can often see children walking home along the Halsema Highway, and buses stop for them because their houses are usually just a few kilometers down the road,” said Madayag, who was at BGHMC to investigate the accident.

Taking care of children is a community duty in Buguias, and many parents are assured of their children’s safety knowing that the “uncles” and “aunties” driving through the town would pick them up, relatives of Latuwed and Bankin told the Inquirer.

“I used to hitch a ride when I was their age,” said one of Latuwed’s aunts.

Latuwed suffered a head injury but her relatives and the police were able to talk to her at BGHMC. Bankin, whose left foot was broken, was resting when the Inquirer visited her on Wednesday morning.–With a report from Vincent Cabreza, Inquirer Northern Luzon