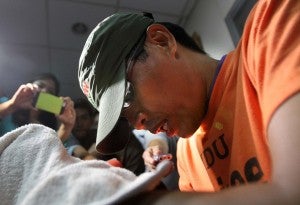 The parents of slain international car racer Ferdinand “Enzo’’ Pastor moved to counter the retraction made by the policeman who earlier confessed to killing their son for cash, by presenting documents and affidavits pinning the murder on the lawman-turned-hitman and on the mastermind earlier tagged by the police.

Tomas and Remedios Pastor went to the Department of Justice (DOJ) on Wednesday to ask the inquest prosecutor, Susan Villanueva, to dismiss the Sept. 8 retraction of P02 Edgar Angel.

“I am sure that respondent Angel’s supposed recantation of his  ‘extrajudicial confession’ is a lie,” Tomas told the DOJ in a separate affidavit he signed. “His allegations that he was supposedly threatened or coerced by the (Quezon City Police District) to execute his extrajudicial confession require presentation of proof. The truthfulness of his statements should be threshed out in a full-blown trial.”

Prior to his turnaround, Angel, a Pasay City policeman initially arrested last month in a QCPD drug bust, implicated Pastor’s widow Dalia and her alleged lover, businessman Domingo Sandy de Guzman, in the Pastor murder. He claimed that De Guzman hired him to kill the racer for P100,000 because he was a wife-beater.

But Tomas maintained that the allegations against the three suspects could be supported by the following:

Records of a telecom company purportedly showing that Angel, De Guzman and Dalia were constantly talking to one another over the phone on June 12, the day Pastor was ambushed at a Quezon City intersection.

The statement of Pastor and Dalia’s domestic helper, Chona Domen, claiming that Dalia and De Guzman had an extramarital affair last year, that Domen herself told Pastor about it, and that it led to quarrels between husband and wife.

A supplemental affidavit by Paolo Salazar, Pastor’s assistant who was wounded in the June 12 attack. In the document, Salazar recalled that Dalia frequently contacted Enzo on the phone as he drove that night, giving him directions and telling him what road to take. He also said he locked eyes with the gunman and that he was positive that it was Angel.

An affidavit dated Aug. 25 executed by Alvin Nidua, another “self-confessed gun-for-hire” currently in police custody, who claimed that a Pasay City barangay official and a policeman contacted him on behalf of De Guzman to have Pastor killed. He said he was offered P200,000 for the hit but that he wanted P500,000. Nidua also claimed hearing from his contacts that De Guzman wanted to get rid of Pastor because the latter had already discovered the affair and was planning to kill De Guzman.