Back at the Senate on Wednesday, Sen. Miriam Defensor-Santiago named (inset from left) Davao Mayor Rodrigo Duterte, former Defense Secretary Gilbert Teodoro and Sen. Grace Poe as her possible running mates if she takes a crack at the presidency in 2016. INQUIRER.net/INQUIRER FILE PHOTOS

Back at the Senate on Wednesday, Sen. Miriam Defensor-Santiago named Davao Mayor Rodrigo Duterte, former Defense Secretary Gilbert Teodoro and Sen. Grace Poe as her possible running mates if she takes a crack at the presidency in 2016.

But not after flaring up and walking out of a Commission on Appointments hearing on the appointments of foreign officers over differences with Ilocos Norte Rep. Rodolfo Fariñas on mustering a quorum.

Santiago showed up at the Senate two months after announcing she had been diagnosed with Stage 4 lung cancer. She declared she was now “partially recovering” with 80 percent of the tumor disappearing—thanks to a “wonder pill.”

“I’m so discouraged by what’s happening. For example, we had the PDAF (Priority Development Assistance Fund) and the DAP (Disbursement Acceleration Program) cases of plunder. Now we have this overpriced Makati building that is alleged to be far overpriced beyond normal,” she told a press briefing.

“Every time I hear this news, I not only get stressed, but I also think that I should be president because it’s now so difficult to be president of this—I will now describe it—feckless or irresponsible country,” she said.

But any run for public office would depend on her full recovery by December this year, the senator stressed.

“I’m considering Rody Duterte in my opium dreams,” she said of the tough-talking Davao mayor. “Maybe, Rody would make a good Vice President not only for me, but even for anybody who is running for president.”

Santiago next mentioned Teodoro, the Arroyo administration’s presidential candidate who lost to President Aquino in 2010.

“Gilbert Teodoro, not only for me but for others. But he told me personally before, ‘it’s now or never,’” she said of Teodoro’s losing presidential bid. “Apparently, he’s making it never. We’ll never know.”

And why not two women running together for a change, Santiago proposed.

“Maybe Miriam and Grace. It sounds like a restaurant, though,” she said, chuckling. “Miriam-Grace sounds so charming.”

Asked for comment, Poe told reporters: “An honor to be considered by Senator Santiago, though I have not made any plans for higher office. Senator Santiago herself said she is giving herself till December and may yet change her mind.”

If she fully recovers by yearend, Santiago said, she has three options: run for President, join the international advisory of a nongovernment organization, or write a book in Washington on a fellowship.

Since she’s fond of writing law books, she said she was leaning toward the third option.

Santiago said she was diagnosed in June with Stage 4 cancer in her left lung, but a six-week treatment had so far worked well with the help of a “wonder pill.”

Recent PET CT scans showed that at least 80 percent of the tumor had disappeared, a sign that she was on “partial recovery,” she said.  This is a combination of CT and PET scans, she explained, using computers and a radioactive drug. 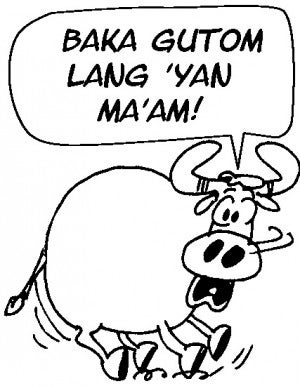 “Since it’s effective, I can now continue my work and build up my strength,” the senator said, setting Oct. 20 as the date for her return to legislative work.

She will continue to take the chemotherapy tablet (she never stopped taking the medication), consult her oncologist if necessary, and undergo scans every three months.

“If I don’t die of cancer, or die from medication, I will die from working just to earn a living because it costs P2,000 a tablet,” she said. “At such a price, how can the children of the poor get well?”

And then of course, she’s experiencing other related ailments such as bleeding of toes, muscle pains and “neuro-muscular” disorders, the senator said.

“Then there’s depression. You lose the will to live, or the will to function,” she said. “That’s just natural; other people are suffering in the same way.”

She said she had totally surrendered to the “will of God.”

“As for all those jerks in government who are my enemies,” she said, “they’re the reason why God created the middle finger.”

Miriam Santiago: ‘80% of my cancer tumor has disappeared’

Miriam back to work, ‘ready to punch’ enemies

Read Next
How to eliminate scalawags in the PNP
EDITORS' PICK
Smart reaffirms 5G leadership as PH’s most reliable 5G mobile operator
Huawei’s relentless mission to bring ultimate health and wellness tracking for your fitness goals
Palace: Senate probe on Pharmally mess will ‘absolutely not’ lead to Duterte
4 essentials for overcoming data protection challenges in the New Normal
Senate panel taps NBI to help locate Pharmally’s Mago
‘Talk is cheap’: Palace says Mago’s testimony of ‘swindling’ gov’t must be substantiated
MOST READ
Pharmally’s Mago no longer in her condo unit — Gordon
Senators secure Pharmally exec offering to turn witness
Pharmally’s Linconn Ong declines executive session with senators
Gordon to Pharmally’s Mago: Show up or be a fugitive
Don't miss out on the latest news and information.