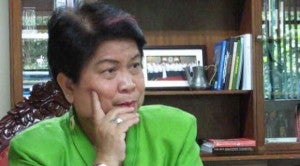 MANILA, Philippines–Department of Social Welfare and Development (DSWD) Secretary Corazon “Dinky” Soliman confirmed Tuesday the findings of a Commission on Audit (COA) report stating that 7,527 Family Food Packs with an approximate cost of P2,784,900.00 meant for survivors of super typhoon “Yolanda” (international name: Haiyan) were lost to spoilage “due to improper handling.”

In an interview with Radyo Inquirer 990 AM, Soliman said that the food packs got wet because the goods were not covered while in transit from Cebu City to Tacloban City.

The COA report on “Yolanda” relief operations, which was posted on its website, revealed that 19,172 canned goods, 81 packs of noodles, and 21 sacks of rice went to waste.

Apart from spoiled food items, COA noted that bottled water procured in Manila worth P69,296,400.00 were not distributed in Tacloban City “due to lack of transport facilities”.

(The report only covered November to December 2013. It did not examine the relief operations this 2014. As of August 28, we have received P1,121,890,457 in foreign and local donation, 90 percent of which was already utilized, including the P780 million plus it said that we failed to utilize.)

The statement was issued by Soliman following findings of a COA report on Typhoon “Yolanda” relief operations which revealed that the department failed to utilize P782,012,090.71 worth of foreign and local cash donations.

Citing the reason for the underutilization of foreign donations, Soliman said that DSWD used government funds to finance its rehabilitation efforts during the aftermath of “Yolanda.”

Soliman also said that the department used its cash donations to finance its “Cash for Work” program, livelihood projects, emergency shelter assistance, and procurement of non-food items such as hygiene kits.