Bar topnotchers pay it forward before making their pile 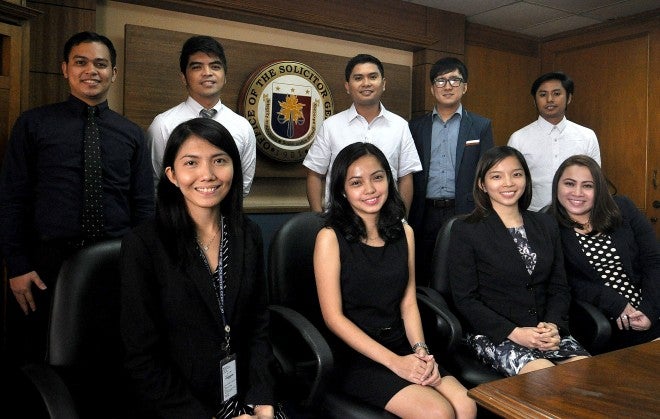 Many would sprint for the high pay and the perks of private law practice. But for these bar topnotchers, a fat paycheck would never match the rewards of representing the government in landmark court battles, while still getting some downtime—considered a luxury in the legal profession.

Over the past two years, nine recent bar topnotchers have found their way to the Office of the Solicitor General (OSG), giving up lucrative offers from the country’s top corporate and law firms for the privilege of arguing the state’s case in the courts.

Infusing new blood into a more than a century-old institution, the fresh recruits—each one from the Top 10 placers in the bar exams from 2011 to 2013—are part of the 70 new solicitors that Supreme Court Associate Justice Francis Jardeleza hired during his two-year stint at the OSG.

Jardeleza, a prominent corporate lawyer and law professor before he joined the government, made it a priority to boost the government’s legal team with “the best and the brightest.”

The best and brightest

“I was already working in a private firm when OSG chief and now Associate Justice Jardeleza met with me and asked if I wanted to be a patriot for the country. I asked to be given some time to decide. I waited until I had at least a year in private practice before I decided,” said 27-year-old Luz Danielle Bolong, a graduate of Ateneo de Manila University and second-placer in the 2012 bar exams.

Maria Graciela Base, at 26 one of the youngest hires, gave in to Jardeleza’s wooing because she believed OSG work was a chance to handle major cases involving the government.

It helped that she was promised that she would be working under her University of the Philippines (UP) law professor, now Acting Solicitor General Florin Hilbay, whom she considered “a brilliant constitutionalist.” Like Base, who finished fifth in the 2012 bar exams, Hilbay is a bar topnotcher, placing first in 1999.

Since joining the OSG last year, Base has been part of the legal team that is defending the government in petitions in the Supreme Court. The list of cases is impressive: the Disbursement Acceleration Program, the Priority Development Assistance Fund and, most recently, the Enhanced Defense Cooperation Agreement with the United States.

“It’s really the opportunity to handle the really interesting cases defending the government [that drew me]… Now that I’m working for the OSG, I’ve seen how things really work in government. You don’t really focus always on legal matters. You should see how things work, how the government deals with people and how the different agencies of government interact,” Base said.

Ivan Bandal, a Silliman University graduate and sixth-placer in 2011, said he found both growth and purpose at the OSG. He joined the team in January 2013, soon after he got a call on the same day his alma mater threw him a parade in Dumaguete City for acing the bar.

“Here at the OSG, even new lawyers like us are given the opportunity to take a direct and active role in handling cases involving diverse subjects—constitutional law, criminal law, even cases requiring the application of corporation law, taxation cases,” Bandal said.

“So it’s intellectually enriching, and at the same time it’s also emotionally fulfilling because you feel that you have really done a lot to also serve your country,” he said.

Making the OSG a top employment choice for the country’s best law school graduates was on top of Jardeleza’s agenda during his more than two years as chief government counsel. With more than three decades of private practice before moving to the government, Jardeleza said he knew how to play his cards and steal away the best from the biggest law firms.

“I compete with them head to head. Since I came from the big law firms, I know how they recruit. So I recruit direct from the law schools. The big law firms, a year before they already know the top 10, top 20 and send out letters to candidates, offering positions,” Jardeleza said.

He said the private firms would “wine and dine” the top graduates and present enticing packages on the table, including signing bonuses of P60,000 to P100,000.

In the case of the government, all it can offer is a snack of siopao, said Jardeleza, who is himself a bar topnotcher, having placed third in the 1974 bar exams.

“But I’m very proud that we get good lawyers. I get the same list, I go to the schools, talk to the deans,” he said.

This aggressive recruitment strategy also involved a personal touch to convince his prospects: Jardeleza waited a year to get Bolong’s “yes,” separately took Gephart and Sarausad out to lunch, and called up Ortea, Gonzales and Pangan to invite them to join the OSG.

Jardeleza admits that he agreed to be interviewed by the Inquirer in order to help the OSG recruit even more top-notch graduates. Just a little over 200 lawyers’ positions have so far been filled out of the total and ideal 361, and only 23 of the OSG’s supposed 30 divisions are staffed with personnel.

OSG lawyers handle an average of 1,000 cases at any one time, running the entire legal gamut, from annulment and land disputes to constitutional issues to international arbitration. But not all the cases are active.

“The training here is probably one of the best all-around training that you can get anywhere. In fact, in a sense it’s superior to law firm training because, by force of circumstance, you get exposed to the big cases at a very young age,” said Jardeleza.

Working to the OSG’s advantage is its competitive pay scale following the passage of Republic Act No. 9417 in 2006, which strengthened the agency by enhancing both personnel requirements and compensation.

Bar topnotchers skip two notches in the pay scale when they join the OSG, going straight to the rank of Associate Solicitor III (entry level is Associate Solicitor I). All top bar finishers hired by the OSG are accorded this premium, earning P75,000 a month in wages and allowances—a competitive pay mandated by law to ensure that the best lawyers would see the OSG as an option.

According to Jardeleza, in terms of the salary scale, the OSG is on par with the big firms. What they cannot match are the perks, he said.

Moving to the OSG meant giving up a quarterly bonus for Qua and an annual profit share for Bolong.

But the young and bright ones keep coming. It is a phenomenon that Jardeleza still finds hard to explain.

“There is a sea change in the temperament, in the ambitions of the young lawyers. Me, I’m from the paying-back generation. I make my pile first, then I pay back to society. My generation will go to private practice, they make their money and then join the judiciary. And then give back,” said Jardeleza.

“These guys, they pay forward. And I think it’s a good thing. I think younger people now want to have a life, want to have work-life balance, something we didn’t have during our time,” said the lawyer of nearly 40 years.

He remembered how, as a young lawyer in a major Makati firm, he would spend 12 hours buried in work, unmindful of the goings-on outside his office building.

“But the young lawyers now, they have many interests, they are a lot brighter. They’re more savvy,” he said.

According to the young OSG lawyers, the job at the OSG affords them a kind of flexibility that private practice would never allow.

“In private firms, since clients are normally big corporations, partners want to make sure that your work is polished. So they guide you, there’s always a team per case. Here, you’re hands-on. You’re the one in charge if that’s your case,” Qua said.

Bolong remembered how when she was working in a private law firm, she sometimes had to write and file posthearing reports in the car to satisfy what a client wanted. Her work also had to undergo several layers of review by her superiors.

“The nature is different. In terms of work hours, it’s more relaxed compared to firm work. In corporate, you’re very guided because the client would be very strict, so you have to make sure that you follow their demands. Here, it’s your choice. Do you want to give extra effort? That’s where being a patriot comes in. It’s up to you, like how focused you will be. But the scrutiny that comes with it, it’s not as strict,” she said.

Getting time away from the paper work is crucial for young family men Ortea and Sarausad.

Ortea likened his priorities to a juggling act: “Work is a rubber ball, family is a glass ball. Even if you drop work, it will bounce back. But if you let go of family, even if it might not break, it will crack. And that’s irreversible.”

“The work here is not as toxic, but it’s important at the same time. Then you have work-life balance. You have time for yourself, your family. You do not work for the sake of working,” said Ortea, 27, who is married but not yet a father.

Sarausad likes that working for the OSG still allows him to do daddy duties. “I have two kids so I have to be practical in that I can provide for them and at the same time find meaning in my work. Every morning I am able to bring them to school,” he said.

Gephart, who had been planning to take up her masters in law when Jardeleza convinced her to stay on, said she had to be both “a realist and an idealist” now that she is a mother to an 8-month-old daughter.

“As long as I’m able to keep my work-life balance and at the same time still contribute to shaping the country’s future, being trained to become the future Philippines’ leader, then I think I’d gladly stay,”  Gephart said.

Gonzales sees no greater prize than winning the nation’s most important cases. “It’s the reward of winning a case, especially when it’s significant,” she said.

For last year’s No. 1, it’s all about making his work worth what the Filipino people are paying him.

“For me, as long as I feel that I get to contribute my talent to the work of the OSG and the role it plays in our legal and political system, I’ll stay with this office. I don’t want to waste taxpayer money,” Pangan said.

UP back on top as ‘average’ student aces bar