UP back on top as ‘average’ student aces bar

Aspiring lawyers eagerly proceed and wait at the Supreme Court premises early Tuesday to know if they make it on the list consisting of 1,174 or 22.18 percent examinees out of 5,292 who passed the 2013 Bar examination. Video by Ryan Leagogo/INQUIRER.net

MANILA, Philippines—A shy and average law student of the University of the Philippines came from behind his class to top the 2013 bar examinations, ending an almost decade-long absence of the premier state university from the top position.

Not only that. Five UP law students also made it to the top 10 passers of the bar exams, a big leap from last year when no one from the UP law school landed in the top 10 rankings.

It was such a busy morning for the 27-year-old Nielson Pangan that he had not yet spoken to his parents when the Inquirer reached him, hours after the Supreme Court announced the exam results.

Pangan said he had been busy taking calls asking him about his landing first in the exams—which were so difficult that, according to the bar exam chair, Associate Justice Arturo Brion, it prompted the high court to lower the passing grade to 73 percent this year.

Pangan said he did not even know how he fared in the exams, prompting this reporter to tell him he had scored 85.8 percent.

At the temple, praying

Pangan, a member of the Iglesia ni Cristo, was at the INC temple when he heard the news.

“I was surprised, I did not expect to top the bar,” said Pangan, who added that in law school, he only ranked average, or in the middle of a class of 200 students.

But he said he made up for it come bar review time, studying 10 hours every day on weekdays, mostly at the UP law library.

He also said friends at law school helped him in his studies.

UP law professor Harry Roque described Pangan, who attended his international law class, as “more of the shy type” in class, where 50 percent of the grade comes from class participation.

“I’m so happy for him,” Roque said, adding this showed that even for average law students, it did not mean the bar exams were “unsurmountable,” especially if “you put your heart into it.”

Roque attributed the good showing of UP this year to the fact that last year the UP law college started to require students to take bar review courses following what seemed to be a dearth of UP students in the top spots of bar exams.

Roque said UP had put a premium on producing good and world-class lawyers.

Still, Roque said that while he was elated about UP’s showing in the bar exams, he still did not agree with the country’s “fixation [on] the bar exam results.”

Brion said the high court decided to lower the passing grade due to several factors, which included the “structure of the grades,” where the scores had 85 as the highest and 28 as the lowest.

He said the court also considered that many of the examinees had difficulty with multiple choice questions, which made up 20 percent of the exams. “But generally, they did very well with the essay type of examination.”

“Had there been no adjustment, had it been strictly 75 (the passing grade), 694 would have passed. That would constitute 13.13 percent of the examinees,” Brion told reporters. 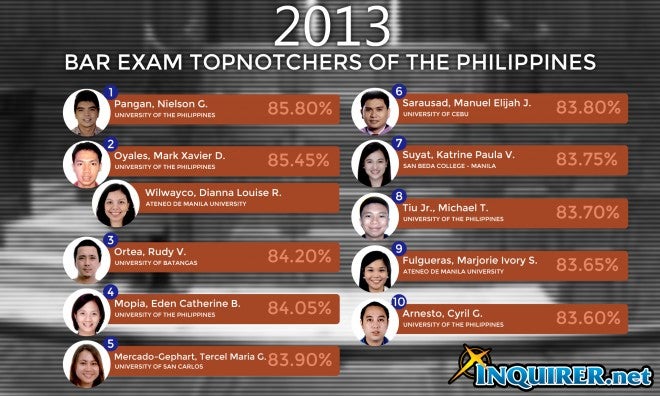 Also at the top

The bar passers will take their oath as new lawyers on April 28 at the Philippine International Convention Center in Pasay City.

Pangan said he had a hard time with the multiple choice questions (MCQ) because the “choices” in the questions seemed to be all correct.

Now that he is a lawyer, Pangan said he would continue working at the Migallos and Luna law office and teach political science at the New Era University in Quezon City.

Equally jubilant about placing fourth in the bar was Mopia who, like Pangan, did not expect to land among the top bar placers.

Twenty-eight-year-old Mopia, who works at Sycip, Salazar, Hernandez and Gatmaitan law offices, said she learned through text messages from friends that she had placed fourth.

Mopia said she intended to continue working with Sycip to determine where she could specialize. But she also hoped to get a scholarship someday for higher studies.

Eighth placer Tiu said he heard the good news from his mother, who was monitoring the news from Cebu.

“I just wanted to pass and I did not expect to [be among the] top because the exams were difficult,” Tiu said.

Like Pangan, he had difficulty with the MCQ portion of the exams. “Either you get it or don’t,” he said.

Tiu said 90 percent of his friends who took the bar passed. He said Pangan was his blockmate and Oyales and Mopia his work mates at Sycip.

Most of them did “self-study” for the exams, he added.

Asked whether he was surprised that Pangan topped the bar, Tiu said: “He had it in him to top the bar. I am not surprised.”—With Tetch Torres-Tupas, INQUIRER.net