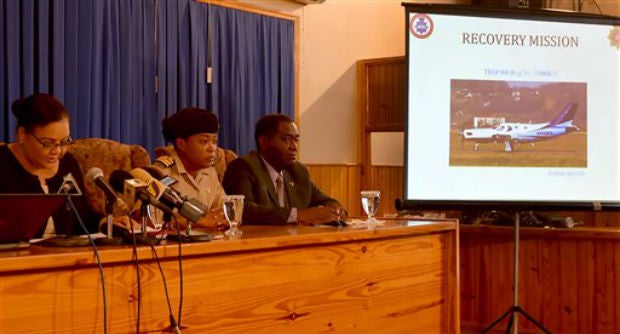 Sitting next to a projected image of the single-engine turboprop Socata TBM700 that went down in the Atlantic Ocean, carrying a prominent upstate New York couple, Jamaican officials hold a press conference in Kingston, Jamaica, Saturday, Sept. 6, 2014. AP

KINGSTON, Jamaica — Rescue crews searching off Jamaica’s coast on Saturday said they could no longer see debris spotted earlier, stymieing efforts to solve the mystery surrounding a small plane carrying a prominent upstate New York couple that went on a ghostly 1,700-mile journey after the pilot was apparently incapacitated.

The island’s military said in a statement that Jamaican and U.S. officials felt the sighting was “consistent with that of a high-impact debris field.”

But on Saturday Jamaica Coast Guard Commander Antonette Wemyss-Gorman said that the pieces of floating debris could no longer be seen.

“We would have to assume it may have sunk,” she said.

The area where the private French-made plane went down has depths of up to 2,000 meters (more than 6,500 feet), according to Leroy Lindsay, director general of Jamaica’s civil aviation authority.

Lindsay said French authorities have volunteered to provide help to bring wreckage up from the ocean depths when it is found.

The plane was carrying Rochester real estate developer Laurence Glazer and his entrepreneur wife, Jane — both experienced pilots. On Friday, US fighter pilots were launched to shadow the unresponsive aircraft observed the pilot slumped over and its windows frosting over. Officials say the plane slammed into the sea when it ran out of fuel at least 14 miles (22 kilometers) off Jamaica’s northeast coastline.

In a Friday statement, the Coast Guard 7th District command center in Miami said three people were reportedly on board the plane. A 154-foot (47-meter) US Coast Guard cutter and a helicopter crew are aiding in the Saturday search off Jamaica.

Son Rick Glazer said he could not confirm his parents were killed, adding that “we know so little.”

But public officials offered their condolences for a prominent couple described as a linchpin in efforts to rejuvenate an upstate New York city stung by the decline of corporate giants Kodak, Bausch & Lomb and Xerox.

Laurence Glazer co-founded Buckingham Properties and served as chief executive and managing partner, working alongside two sons. Overall, the company owns more than 60 properties in the Rochester area and in central Florida.

His friend Harold Samoff said Saturday that he and Glazer got started in the real estate business in 1970 with a small apartment building, then went on to acquire and revitalize more and bigger properties on the inner-city periphery, reasoning that “just like blight can spread, improvement can spread, also.”

Their single-engine plane took off at 8:45 am Friday from the Greater Rochester International Airport in New York en route to Naples, Florida. Air traffic controllers were last able to contact the pilot at 10 am, the US Federal Aviation Administration said in a statement.

On a recording made by LiveATC, a website that monitors and posts air traffic control audio recordings, the pilot is heard saying, “We need to descend down to about (18,000 feet). We have an indication that’s not correct in the plane.” A controller replied, “Stand by.”

Controllers then cleared the plane to descend to 20,000 feet (6,096 meters), a command which the pilot acknowledged. A couple minutes later, a controller radioed the plane by its tail number: “900 Kilo November, if you hear this transmission, ident” — identify yourself. There was no response.

At 10:40 am, two F-16 fighter jets were scrambled from a National Guard base in South Carolina to investigate, according to a statement by the North American Aerospace Defense Command. Those jets handed off monitoring duties around 11:30 am to two F-15 fighters from Homestead Air Reserve Base in Florida.

The US fighter jets followed the plane until it reached Cuban airspace, when they peeled off, said Preston Schlachter, a spokesman for the North American Aerospace Defense Command & US Northern Command.

On a LiveATC recording, the fighter pilots can be heard discussing the Socata pilot’s condition.

“I can see his chest rising and falling right before I left,” one said.

“It was the first time we could see that he was actually breathing. It may be a deal where, depending on how fast they meet them, he may regain consciousness once the aircraft starts descending for fuel …” the fighter pilot said.

The pilot was speculating that the Socata pilot was suffering from hypoxia, or oxygen deprivation, but Schlachter said the Air Force doesn’t know for certain that was the case.

Cases of pilots becoming unresponsive while their planes wander the sky are unusual, with probably not much more than a handful of such incidents over the last decade, said aviation safety expert John Goglia. They sometimes occur when a pilot becomes incapacitated by a heart attack or stroke, but more often the problem is insufficient cabin pressurization that causes the pilot to pass out, he said.

In 1999, the pilots of a Learjet carrying professional golfer Payne Stewart from Orlando, Florida, to Texas became unresponsive. The plane took a turn and wandered to South Dakota before running out of fuel and crashing into a field west of Aberdeen. Stewart and five others on board were killed. An NTSB investigation blamed the accident on depressurization.

Two dead as unresponsive, small US plane crashes off Jamaica