Two dead as unresponsive, small US plane crashes off Jamaica 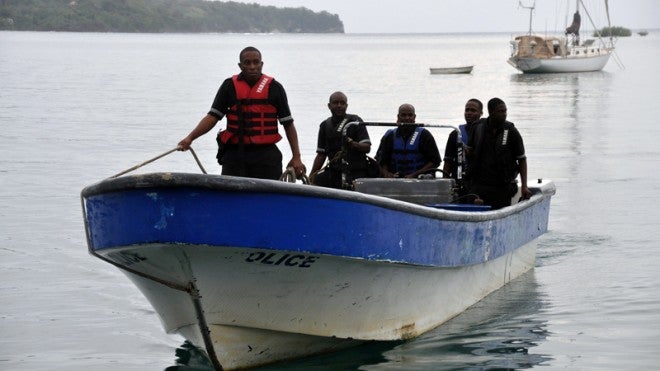 Jamaican Marine Police return to the Port Antonio Marina after a fruitless search for a plane that crashed into the ocean near Port Antonio, Jamaica, Friday, Sept. 5, 2014. A small plane flew down the Atlantic Coast and beyond Friday before finally crashing in the waters off Jamaica. The fate of the two or more people aboard was not immediately known. Maj. Basil Jarrett of the Jamaican Defense Force said the plane went down northeast of the coastal town of Port Antonio and the military dispatched two aircraft and a dive team. (AP Photo/Everard Owen)

WASHINGTON— A small US plane crashed in waters off Jamaica on Friday after flying for hours with an unresponsive pilot, veering off course and sparking a fighter jet escort. At least two people were killed.

The plane went down 14 miles (22 kilometers) north of Port Antonio on the northeast coast of the island, a Jamaican official told AFP.

Authorities were “fairly confident” late Friday that an oil slick in the water was from the plane, but were suspending ongoing search operations for the night, Major Basil Jarrett of the Jamaican Defense Force told CNN.

Efforts to locate the plane would resume early Saturday “at first light” and a US cutter was expected to join in the search, he added.

The seven-seat aircraft, a Socata TBM-700 — which took off from Rochester, New York and was headed to Naples, Florida — crashed at around 2:15 pm (1815 GMT), US aviation officials said.

There were at least two confirmed victims onboard: Rochester real estate developer Larry Glazer and his wife Jane, according to a spokesman for New York state lawmaker Joseph Morelle, citing family members.

Glazer was a pilot, the spokesman told AFP, but there was no immediate confirmation he was flying the plane.

“We are devastated by the tragic and sudden loss of our parents, Jane and Larry Glazer,” the three adult children of the couple said in a statement, cited by local media.

“We understand that there are many questions yet to be answered about today’s events, and we too are awaiting answers,” they said.

Morelle said he was “deeply saddened” to learn of the deaths, calling the Glazers “longtime personal friends.”

“Their presence will forever be felt throughout Rochester, a community they loved, fought tirelessly for and called home,” he said in a statement.

The FAA said flight controllers lost contact with the plane at 10:00 am, prompting the North American Aerospace Defense Command to scramble two F-15s.

The fighter jets peeled away before the plane entered Cuban airspace, which it crossed before heading over open water towards Jamaica.

US and Jamaican coast guard ships were both sent to respond to the crash scene.

NBC News, citing unnamed US officials, said the pilot was seen “unconscious and slumped over” in the cockpit.