What did Enrile, Reyes say to each other? | Inquirer News
Close
menu
search

What did Enrile, Reyes say to each other? 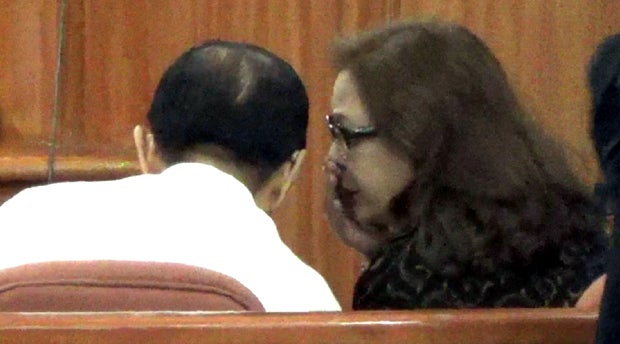 Atty. Gigi Reyes whispering to Sen. Juan Ponce Enrile during their arraignment for fifteen counts of graft at the Sandiganbayan on Friday Sept. 5, 2014. Ryan Leagogo/INQUIRER.net

MANILA, Philippines — Senator Juan Ponce Enrile and his resigned chief of staff Jessica Lucila “Gigi” Reyes encouraged each other that they could get through a challenging phase in their lives as they face trial for plunder and graft over the pork barrel scam.

This was according to Enrile’s lawyer, Eleazar Reyes, who told reporters that the two exchanged words of encouragement as they sat beside each other when they were arraigned for 15 counts of graft on Friday.

“They were trying to assure each other that they’ll be able to get over this controversy,” Reyes said.
Before the arraignment, Enrile and Reyes sat on opposite sides of the room.

Reyes kept her head down, while Enrile kept on giving side glances to his former chief of staff.

That was until Associate Justice Samuel Martires asked Enrile and Reyes to sit beside each other at the lawyers’ table for their arraignment.

Martires said they were both lawyers anyway, and that Enrile is frail with old age while Reyes suffers from panic attacks.

Reyes, who was wearing a yellow blouse, was noticeably quiet and somber as she sat beside the “barong”-clad Enrile.

“They might have said ‘hi’ or ‘hello.’ They haven’t seen each other in a long time,’ Reyes’ lawyer Anacleto Diaz said.

The two engaged in small talk before Reyes eventually broke down in tears.

What started out as small talk turned into a time to catch up, as they eventually appeared comfortable with each other and talked.

Reyes brought out a white towel to ease her facial spasm that she got when she hit her head during one of her bouts with anxiety attacks.

At one point, she seemed to be showing to Enrile her eye lid that she could not move because of the spasm.

Though she did not cry uncontrollably, she kept on wiping her nose during the arraignment.

Enrile did not show any emotion, but he appeared attentive as Reyes kept talking.
The two had been close when they worked together in the Senate before they had a falling out amid rumors that they were having an affair.

They are both facing plunder and graft for their alleged involvement in the pork barrel scam, the purported diversion of pork barrel funds to ghost projects for kickbacks under the scheme of Janet Lim-Napoles.

Enrile, Gigi Reyes together again at Sandigan arraignment; and there’s Napoles, too