Hundreds demonstrate in support of Binays 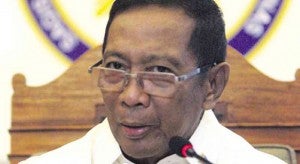 MANILA, Philippines — About 800 Makati residents from the city’s 33 villages gathered in front of the Makati City Hall’s Building 2 on Monday to demonstrate their “indignation and disgust” at the Senate Blue Ribbon Committee’s investigation into the allegedly overpriced building.

The rally of Binay supporters took place at the same time as an ocular inspection of the building by members of the Senate committee led by Senators Aquilino Pimental III and Antonio Trillanes IV. The city government said 3,000 demonstrators were expected at the rally but the Makati police estimated the crown at only 800.

Some of the demonstrators, who gathered at the City Hall Quadrangle just in front of the building under investigation, booed the two senators as they arrived for the inspection while others cheered for Makati City Mayor Jejomar Erwin Binay and Vice President Jejomar Binay.

Carrying banners expressing their support for the Binays, the rallyists condemned the “unjust persecution of their leaders on the basis of unfounded accusations” made by their political opponents.

“To the senators and parties out to destroy our beloved Vice President Jojo Binay, the people of Makati will fight! We have friends and relatives in the different provinces all over the Philippines. We will never forget everything that you are doing!” said Barangay (village) South Cembo chairman Ritchie Rodriguez, drawing a roar of approval from the crowd.

Senior citizen resident Rose Sibug, who also spoke during the rally, appealed to the detractors of the city mayor and the vice president “to stop spreading lies” about the cost of the cakes given to the elderly.

“The city government has been giving birthday cakes to senior citizens for many years already so why are they bringing up the issue just now?” said Sibug, who claimed she has been a resident of Makati since 1967.

The city’s provision of cakes by the city for local senior citizens on their birthday has drawn criticism from various sectors since lawyer Renato Bondal, one of the complainants in the plunder case filed against the Binays, claimed that each cake cost  about P1,000 although he later admitted that was only a guess. The Makati City government disputed the allegation, claiming the cakes cost only P306.75 each.

The barangay leaders and city officials pledged support for the city mayor and the vice president in the face of “attempts to put them down.”

Bondal charged that Monday’s demonstrators were “paid” to show up for the pro-Binay rally.

An hour before the start of the Senate inspection of the allegedly overpriced Makati building, Bondal and his co-complainant Nicolas “Ching” Enciso VI attended a  “Holy Mass Against Corruption” to pray  for more support from Filipinos in the fight against corruption in government.

They were joined by about 50 members of the organization United Makati Against Corruption (Umac) who wore white shirts during the Mass at the St. Joseph the Worker Parish in Barangay Palanan, Makati City.

In a message delivered after the Mass, Bondal asked those who attended to wear black ribbons to show their support for the fight against corruption in Makati.

Umac, which is composed of Makati students and residents, said that they wanted to be a good example to the Filipinos in their “fearless” effort to expose anomalies in the local government.