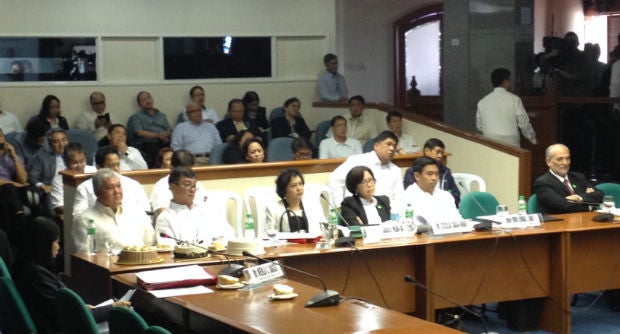 MANILA, Philippines – More alleged overpriced projects in Makati City, including the cost of cakes, were bared during a Senate hearing on Wednesday by one of the complainants against City Mayor Jejomar Erwin “Junjun” Binay.

Atty. Renato Bondal claimed during the hearing of the Senate blue ribbon committee that the price of cakes being given to senior citizens in the city by the local government amounted to P1,000 each compared to the P570 cakes in Red Ribbon and P590 in Goldilocks.

But Binay, who was present at the hearing, said the price mentioned by Bondal was not the price “reflected” in their documents.

Before this, Bondal claimed that other projects in Makati, aside from the carpark building which was the subject of their cases against the mayor and his father, Vice President Jejomar Binay, were allegedly overpriced.

(The Makati City Hall costs P7 billion, that is overpriced. The phase 2 of Ospital ng Makati, in our documents already costs P2 billion. That’s just the phase 2. Until now, it is still being constructed.)

(Makati Science is also included among the overpriced buildings. All the top infrastructures are funded by split debts from the Land Bank. So Makati can be called as the ‘chop-chop’ capital of the Philippines.)

Bondal said the Makati government managed to jack up the prices of their projects in the city because it allegedly splits the contracts, and did not go through bidding.