Emergency powers not needed to prevent power crisis in 2015 — PCCI 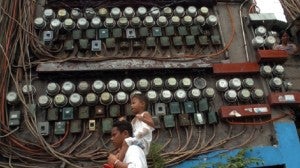 MANILA, Philippines – The Department of Energy does not need to tap the emergency powers provided under the Electric Power Industry Reform Act (Epira) as the government could readily address the expected 400-megawatt power supply shortfall in Luzon by 2015 through the Interruptible Load Program.

In an interview with reporters Tuesday, Jose Alejandro, energy committee head at the Philippine Chamber of Commerce and Industry (PCCI), explained that this program alone could easily provide 2,300 megawatts in additional capacity coming from the existing generators privately owned by enterprises.

“There is 2,300 MW registered at the Energy Regulatory Commission which can come from standby generators and so that’s the potential (capacity)… It’s going to be a win-win solution if an enterprise decides to run its genset. If there will be power outages, I will really have to run these gensets at my own cost. But under the ILP, I will be paid, at cost, for running my genset,” Alejandro explained. “Of course, there is no premium to this as I shouldn’t be making money from running my genset. I will just be reimbursed for my cost.”

According to Alejandro, the ILP has already been successfully implemented in Visayas and Mindanao as a stop-gap measure to alleviate a power supply shortfall.

Customers—particularly the big industrial and commercial customers—who have the ability to produce their own electricity through generating sets are among those that will be allowed to participate in the ILP.

Under this program, participating customers would allow distribution utilities to either cut off or reduce the electricity being supplied to them, particularly during peak periods of the day or during emergency conditions. During these hours, “de-loaded” customers are expected to use their gensets.

In turn, these qualified customers would be compensated since, by generating their own power, they may incur higher costs for running their standby generating sets or plants than when their power is supplied by their distribution utilities.

Alejandro, however, called on the DOE and ERC to clarify the rules and mechanisms under the ILP and ensure that these would not pose a problem for those companies that already have existing contracts with retail electricity suppliers (RES).

“The PCCI’s advocacy has always been that we don’t need emergency powers. All we need is the strong political leadership,” Alejandro stressed.

The PCCI earlier urged the government to craft a roadmap or a solid and concrete plan based on the proposals put forward by the private sector, noting that a well-laid plan would be critical should the government decide to declare a state of emergency.

According to the country’s largest business group, the expected power supply crunch of as much as 400 megawatts next year will have to be resolved using basic stop-gap or the so-called band-aid measures that would not need the declaration of a national emergency. The period beyond 2016, meanwhile, must be addressed through the crafting of a well-laid out plan agreed upon by all stakeholders and which government could smoothly and competently implement through the grant of emergency powers to the President, if the plan would warrant the declaration of a state of emergency.