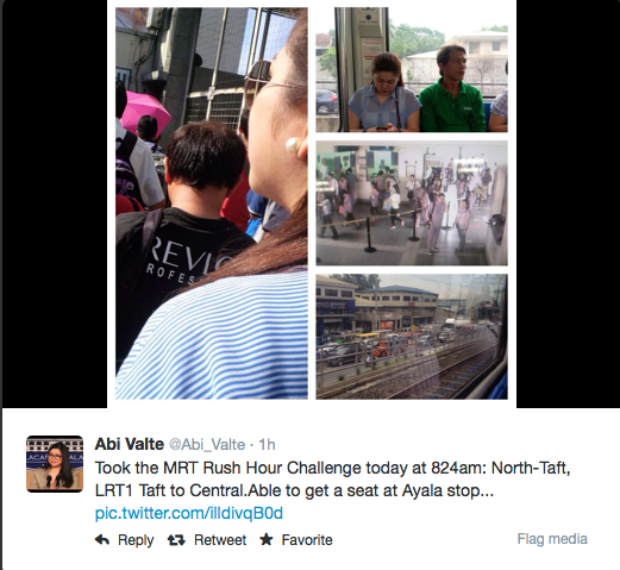 MANILA, Philippines — They heard your call and are taking up the challenge. Government officials are braving long lines and cramped spaces to prove that they understand the situation of ordinary Filipino commuters.

She said she rode the MRT at the North Avenue station at 8:24 a.m. On her way to Taft Avenue station, Valte said she was able to get a seat when more people filed out at Ayala station.

Valte confirmed to INQUIRER.net that she was with Lacierda when she took the train. One of the photos she posted showed her standing near a ticketing booth with a man.

Valte said they waited in line for 37 minutes while the ride from the north end to the south end of the MRT 3 took 40 minutes.

The two officials also took the LRT Line 1 from Taft to Central station, which is near Malacañang Palace.

Responding to netizens, she said that although the ride was “okay,” there was a “lot to be desired” while lining up for a ticket.

“Line to buy the ticket was about 10 people deep,” she said.

“Of course, siksikan (it was packed). I apologized a few times to the lady close to me for bumping into her,” she added.

Valte said her realizations after the ride were similar to that of other passengers –  more coaches and working escalators are needed.

She said they did not have any security officers with them, as always, and that the Presidential Security Group (PSG) did not know they were there.

The so-called “MRT Rush Hour Challenge” came about amid problems faced by MRT passengers and the popularity of the “ice bucket challenge.”

Passengers and critics of the Aquino administration have long been calling on Palace officials to ride the MRT instead of just issuing statements claiming that the government was doing everything it can to improve transportation services.

The calls snowballed after the MRT started bogging down frequently, with one instance resulting in a train overshooting a concrete barrier and injuring more than 30 passengers.

Transportation Secretary Joseph Emilio Abaya took the MRT a week ago to inspect the trains and observe the situation of the passengers. However, he drew flak for riding the MRT during non-peak hours on Thursday afternoon and bringing with him aides and media men.

This prompted netizens to call on officials to ride the MRT during rush hour so they can experience being packed like sardines inside the train and lining up for hours to get into the station.

On Friday morning, it was Senator Grace Poe’s turn to take on the challenge. She was lauded by many for going to the station during rush hour, queuing in line and standing inside a coach, unmindful of the inconvenience.

Nevertheless, some netizens remained unimpressed. They said that while the officials took the time off to try the challenge, it also meant that don’t have to commute daily unlike other Filipinos who ride the MRT not as a challenge but as part of their daily routine.