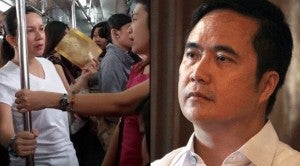 Photo from the office of Sen. Grace Poe and INQUIRER FILE PHOTO

For some netizens and MRT commuters, Poe won the MRT challenge over Abaya.

A day before Poe took the MRT from North Avenue until Taft Avenue Station, Abaya rode the train from Ortigas to North Avenue station on Thursday.

Despite Abaya saying that he wanted to ride the MRT “as quietly as possible” during the pro-Aquino Koalisyon ng Mamamayan Para sa Reporma (KOMPRe) conference on Monday, the secretary rode the MRT with his fellow officials and some members of the media.

This drew criticisms from netizens who said Abaya should have taken the MRT during the rush hour and without media fanfare.

Poe, by herself, rode the MRT at 8:20 a.m. Friday, the height of rush hour, while Abaya was on board around 1 p.m. during the off-peak hours.

The netizens reactions to Abaya and Poe were varied with the senator gaining political mileage as some have even pushed for her to run for president in 2016.
Here are some of the posts on Poe:
http://storify.com/inquirerdotnet/senator-grace-poe-rides-the-mrt

Here are some of the posts on Abaya: