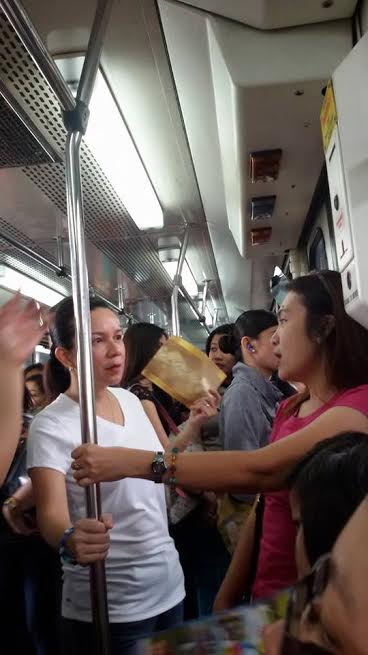 MANILA, Philippines – A defective ticket machine and escalator, not to mention the usual long queue, greeted Senator Grace Poe when she rode for the first time the Metro Rail Transit 3 during the Friday morning rush hour.

Poe said she arrived at the North Avenue Station in Quezon City and joined the long line of passengers at 8:20 a.m.

“To be fair, the line was moving smoothly when I arrived at around 8:20 a.m.,” she said in a text message.

But she said “escalator was not working, causing a bottleneck of passengers lining up in North station.”

“My ticket was stuck in the machine and the security guard had to manually open it to retrieve my ticket,” said the Senator.

Poe said she took the women only train which she described as “pleasant.”

“It was full in some stops but I heard later on that some MRT officials prevented passengers from rushing to the train because they knew I was inside.”

“I know they meant well. But I called their attention nicely and explained I need to experience the plight of our passengers.”

The senator said her total travel time took a little more than an hour and a half from North Avenue to Taft Avenue station in Pasay, not including the 40 minutes that took her to line up.

She said the Taft Station was “orderly” but again the escalator was not working.

“Some passengers also told me the elevators in some stations don’t work and Persons with Disabilities (PWDs) are having trouble getting to the station.”

Despite this, Poe said the passengers when she spoke to them told her that they still preferred to ride on the MRT.

“I believe the MRT is not a hopeless situation. The government just has to step up its effort in the proper maintenance of the trains and the stations,” she said.

Poe, then, urged officials to also take the MRT once in a while so they would know better how to improve the system.

The senator said she made the unplanned MRT ride saying, she needed to experience first hand what the passengers were going through so she could ask the right questions when her committee conducts a hearing on the state of public transport sector on Monday.

Poe said it was the first time she took the MRT as she used to ride the LRT when she was studying at the University of the Philippines in Manila.