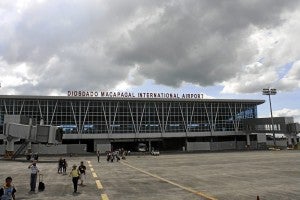 CLARK FREEPORT, Philippines—The expanded terminal at Clark International Airport (CRK) is underutilized due to the lack of a broad information campaign as well as connectivity to the Ninoy Aquino International Airport (Naia), airport officials told the House committee on transportation during a hearing here on Friday.

Darwin Cunanan, vice president for commercial development of the state-owned Clark International Airport Corp. (CIAC), said that CRK was not being maximized when questioned by Pampanga Rep. Joseller Guiao.

Cunanan said CIAC surveys showed that 88 percent of passengers in the CRK catchment area (Ilocos, Cagayan Valley, Cordillera and Central Luzon) would fly via CRK if flights were available and schedules were convenient.

Twenty-two percent of Naia passengers from northern and Central Luzon said they were not aware of flights at CRK.

The Commission on Audit (COA) confirmed Terminal 1 was underutilized in its audit of the CIAC last year.

“The use of the aerobridges, which Terminal 1 exclusively caters, is extended to a few privileged airlines, namely, Dragon Air, Asiana, Qatar Air and Emirates. As such, the sprawling terminal of 2,700 square meters is sparsely utilized exclusively by said full-service airlines,” the COA said.

“Records show that flights of these airlines for 2011 to 2013 captured a minimal 10 to 18 percent share of the total international flights,” it added.

Catanduanes Rep. Cesar Sarmiento, chair of the committee on transportation, committed to take up in a Sept. 2 budget hearing the needs of CRK for massive promotion and a high-speed rail system.

Victor Jose Luciano, CIAC president and chief executive officer, said President Aquino, in a Cabinet cluster meeting on Aug. 19, gave the Department of Transportation and Communications (DOTC) the green light to proceed with a feasibility study for a modern rail connecting CRK and Naia.

The DOTC budget for 2015, Luciano said, allocated P1.2 billion for detailed engineering plans for a bigger terminal at CRK.–Tonette Orejas