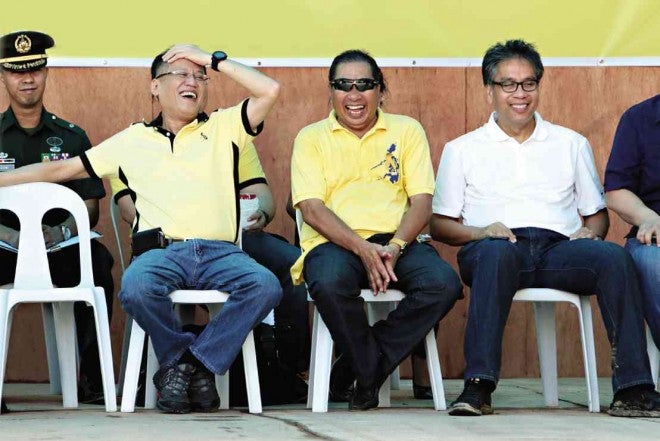 IT’S MORE FUN IN ORIENTAL MINDORO President Aquino lets out a hearty laugh during a visit to Puerto Galera, where he briefed officials on the multibillion-peso allocation for the province’s infrastructure projects. Sharing his mirth are Oriental Mindoro Gov. Alfonso Umali and Interior Secretary Mar Roxas. GRIG C. MONTEGRANDE

The President said P6.1 billion was earmarked for Oriental Mindoro and the rest, for Occidental Mindoro.

The budget for Oriental Mindoro has been apportioned for infrastructure projects covering the years 2011 to 2015, particularly roads, bridges, flood control, airport, ports, irrigation and farm-to-market roads that were either completed or in progress.

The President said the completion of the 20-kilometer gap in the road project would depend on the decision of the Department of Public Works and Highways (DPWH) to “preserve the coastline for tourism purposes” or “preserve the rainforest.”

He raised the need to work together “to minimize the impact on the environment.”

Twenty-one percent of the 2015 national budget, or P562.35 billion, has been allocated for infrastructure, which is a priority of the government, according to the President.

He cited the reforms made by Public Works Secretary Rogelio Singson that did away with “kickbacks,” “tongpats” (padded costs) and “chop-chop” projects, resulting in savings by the DPWH of P27 billion from projects covering July 2012 to May this year.

The President said the government would continue its fight against corruption, even if his critics were bent on casting doubts on the reforms made by his administration and preferred to focus on the “negative.”

“There are those who are all too eager to give negative comments when they are actually part of those who led the previous administration,” he said.

From Puerto Galera, the President proceeded to the Philippine National Police regional camp in the City of Calapan, where he graced the Governor Alfonso Umali’s Shooting Cup at the firing range.