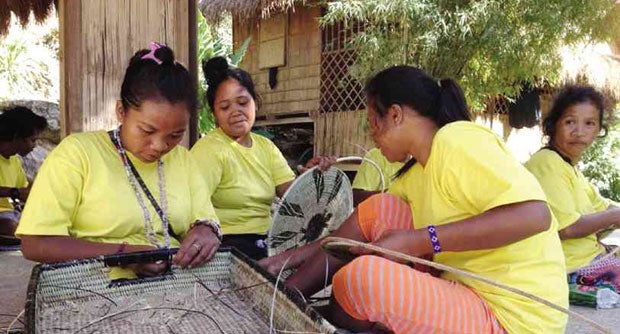 It is not just Puerto Galera’s long, white beaches that have been drawing tourists to Oriental Mindoro. A community of the Iraya, a subtribe of the Mangyan, has also gained their attention.

Situated at the foot of Mt. Malasimbo, 9 kilometers from the town proper, the Mangyan Village in Barangay (village) Talipanan offers a glimpse of the indigenous people’s heritage, slowly catching up to the modern times.

When the Inquirer visited the place early this month, a concrete building was emerging in the midst of native huts. Coconut trees and a mountain range serve as backdrop of the structure that will house a modern computer center for the Mangyan children.

“Whenever tourists come (to Puerto Galera) these days, it is very unlikely they skip the Mangyan Village,” said Fabian de Jesus, its caretaker.

De Jesus, a 53-year-old Batangueño, was placed in charge of the Mangyan Village by businessman and philanthropist Jaime Zobel de Ayala and his wife, Bea. This was after a major battle between government forces and communist rebels in 1986, which forced the indigenous families to leave the mountain and squat in the lowlands, he said.

“The Mangyan families used to live in the mountain in an area they called the baryuhan (barrio),” De Jesus said. “They never wore slippers but wore old and torn clothes, and they could rarely afford to eat rice in a week. Donya Bea realized how difficult their life was,” he said.

The Ayalas bought a piece of the property in 1990 and sought the help of the Department of Education (DepEd) in building a four-classroom elementary school for the tribe. In 2007, the couple acquired the rest of the 4.2-hectare land and started developing the Mangyan Village, complete with power and water supplies.

At present, 69 Mangyan houses (each with an area of 30 square meters) have been erected inside the village. Construction is ongoing to meet the target of at most 300 houses, De Jesus said.

Alcohol drinking, gambling and pornographic materials are strictly prohibited, “as those could be the source of accidents or disturbances,” he said.

The center of the Mangyan Village is a large hut that serves as showroom for the handwoven nito (native vine) baskets, beer bottle holders, place mats, laundry baskets and trinkets.

Every day, about 40 Mangyan, mostly women, gather around the showroom, wearing their uniform yellow shirts, and begin weaving nito strands.

“I learned this from our elders,” said Myrna Tullo, a 35-year-old mother of five. She wove a plate with intricate designs of reptile and flower images.

Tullo said her family used to gather lami (sweet potato) before they moved, years ago, to the Mangyan Village. She said she never went to school, but her children were able to do so in their new space.

“I want them to finish their studies so they could be whatever they want. Maybe teachers, someday,” she said.

The nito products are ordered from Manila where the Ayalas have opened two stores in Makati City. The Mangyan workers receive shares from the sales and four kilos of rice every week. They are even allowed to display their own nito products inside the Mangyan Village to earn extra.

“We’re happy whenever tourists come because they buy our products,” said Angelito Cabayog, 30.  He said he shifted from farming to nito weaving to support his family.

At the very least, De Jesus said each Mangyan earns P60-P70 in a day.

In 2013, the Mangyan Village received 1,879 visitors. Some of them were foreigners visiting Puerto Galera’s beaches and others were Filipinos on educational tours.