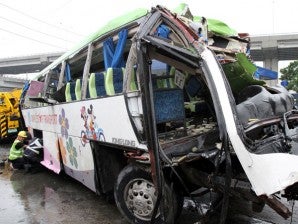 MANILA, Philippines—The Land Transportation Franchising and Regulatory Board has put together lists of the most dangerous buses in Metro Manila, based on the number of accidents that have resulted in deaths, injuries, and damage to property, and warned that they might lose their franchises.

LTFRB board member Manuel Iway on Thursday said the unprecedented move aims to urge companies to be more careful with the welfare of their passengers.

“If they do not improve their operations to become safer, we will cancel their franchises,” he said in an interview.

The list is broken down into three categories—number of deaths, injuries and property damage—and is based on accident reports submitted by all public utility buses to the LTFRB. The lists published by the LTFRB cover the whole of 2010 and the first half of 2011.

Lists of the 10 most dangerous bus operators in Metro Manila:

Based on the number of deaths (passengers and bus personnel)

Based on the number of injured (passengers and bus personnel)

Based on damage to property

On the same day it released the list, the LTFRB also temporarily suspended the franchises of two bus companies whose units recently figured in an accident.

The management of Safeway Bus Lines and Universal Guiding Star Bus Line Corp. were ordered to halt their operations for 30 days as the transport board asked them to explain why their franchises should not be canceled permanently.

Three people were injured on September 20 when two buses belonging to the firms figured in an accident in Quezon City.

Since the start of the year, the LTFRB has been cracking down on bus companies that frequently figure in mishaps, particularly on major thoroughfares such as Edsa and Commonwealth Avenue in Quezon City.

Iway said that the agency was also drafting rules that would make it mandatory for drivers and conductors of public utility vehicle to receive fixed salaries instead of earning on a commission basis.

“With the current system, many drivers are often exhausted or lack sleep because they are forced to work long hours,” Iway said, adding, “This puts the safety of passengers in jeopardy.”