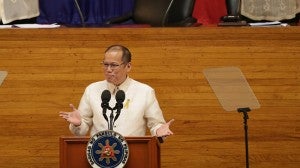 MANILA, Philippines – Personal attacks. That’s what President  Benigno  Aquino III said of the protests held and impeachment complaints filed against him by his critics.

The President mentioned how his critics would continue to rally in front of his house in Times Street in Quezon City although he seldom stayed there.

He also belittled the decision of a committee at the House of Representatives that found the three impeachment complaints filed against him “sufficient in form.”

(Perhaps it would be unlikely that it would become insufficient in form because it’s a form, you just fill in the blanks.)

“Naniniwala ako  magkakaroon  tayo  ng  katarungan  diyan  (I believe that there will be justice),” he said.

He added that there were now less people criticizing him.

(Their numbers are dwindling because more people now trust the government.)

Two of the three impeachment complaints filed accused Aquino of betrayal of public trust for realigning government savings to the Disbursement Acceleration Program (DAP), which was declared partly unconstitutional by the Supreme Court.

The third one also tackled betrayal of public trust and culpable violation of the Constitution because of the Philippine government’s Enhanced Defense Cooperation Agreement with the United States.

But Bagong Alyansang Makabayan (Bayan) secretary general Renato Reyes, one of the petitioners of the first complaint on DAP, said the President should read their impeachment complaint to see that it is not “just a personal attack on him by the Left.”

“The complaint was sign by a broad range of individuals, some of whom even supported him in the past. If he only takes time to actually read the complaint, he will see that there are serious allegations regarding culpable violations of the Constitution and betrayal of public trust that we did not conjure out of thin air but rather based on actual documents that he signed,” Reyes said.

He said Aquino should instead answer the allegations of their complaint.

Read Next
Aquino remains open to term extension: I’ll listen to my ‘bosses’
EDITORS' PICK
Duterte signs law giving rights, more protection to foundlings
Comelec won’t proclaim party-list groups yet
DOJ-led panel drops 29 cases of torture, EJKs
Luxe property: A way to build, preserve wealth
House energy committee chair Arroyo bats for cheap electricity
Honolulu Café is the cure for your Egg Tarts and Roastings cravings
MOST READ
Heart Evangelista gets a ‘no’ from Chiz Escudero after asking, ‘Do I deserve a bag?’
Pahiyas Festival back but tourists greeted with austere celebration
PH logs 110 new COVID-19 cases; active down to 2,487
Man posing as Marcos spox revealed to be an inmate in Bilibid — Guevarra
Don't miss out on the latest news and information.

newsinfo
Duterte signs law giving rights, more protection to foundlings
newsinfo
Comelec won’t proclaim party-list groups yet
newsinfo
DOJ-led panel drops 29 cases of torture, EJKs
business
Luxe property: A way to build, preserve wealth
newsinfo
House energy committee chair Arroyo bats for cheap electricity
pop
Honolulu Café is the cure for your Egg Tarts and Roastings cravings
entertainment
Heart Evangelista gets a ‘no’ from Chiz Escudero after asking, ‘Do I deserve a bag?’
May 17, 2022
newsinfo
Pahiyas Festival back but tourists greeted with austere celebration
May 18, 2022
newsinfo
PH logs 110 new COVID-19 cases; active down to 2,487
May 17, 2022
newsinfo
Man posing as Marcos spox revealed to be an inmate in Bilibid — Guevarra
May 17, 2022
newsinfo
Congress canvassing of votes for president, VP to begin May 24
May 17, 2022
newsinfo
3 Iloilo residents found with Omicron subvariant
May 18, 2022