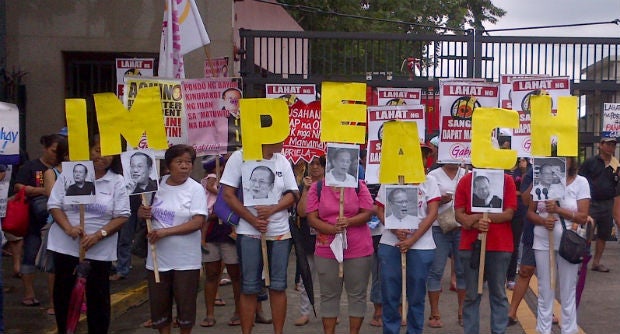 Militant groups on Monday staged a rally in the House of Representatives as anti-pork barrel groups filed an impeachment complaint against President Benigno Aquino over the Disbursement Acceleration Program. MARC CAYABYAB/INQUIRER.net

MANILA, Philippines — Anti-pork barrel groups on Monday filed an impeachment complaint against President Benigno Aquino III over the Disbursement Acceleration Program (DAP), parts of which were declared unconstitutional by the Supreme Court.

The complainants filed the complaint at the House of Representatives Secretary General’s office around 11 a.m.

The groups want Aquino impeached for “violating the Constitution by usurping Congress’ power of the purse…” according to Bayan Muna Representatives Neri Colmenares and Carlos Zarate.

They also want Aquino’s head for “betraying the public trust by exacerbating the corrupt pork barrel system, committing tyrannical abuse of his powers, violating his oath of office and perpetrating multiple counts of technical malversation and corruption of public officials.”

“For this, he must be held accountable so that lessons must be learned. For this he must be impeached,” the prefatory of the complaint read.

The complaint was endorsed by Colmenares and Zarate, and Anakpawis Representative Fernando Hicap.

Groups to file impeachment rap vs Aquino over DAP before Sona