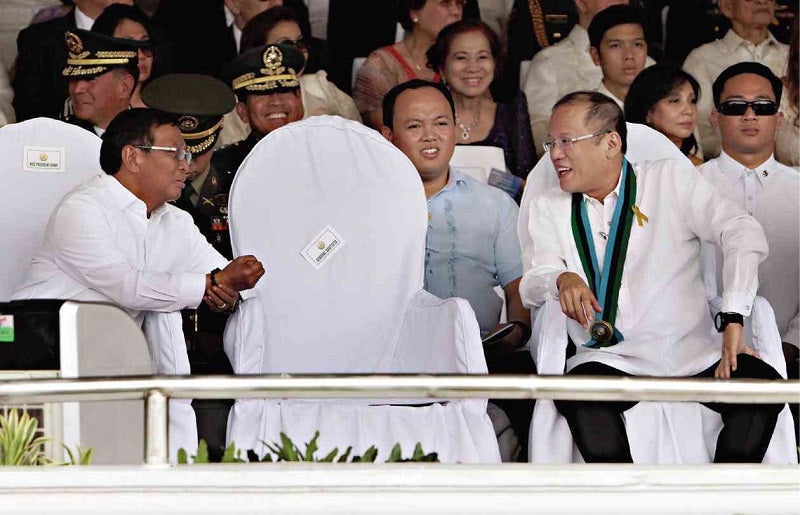 GAME OF THRONES? President Aquino chats with Vice President Jejomar Binay during ceremonies marking the change in leadership of the Armed Forces of the Philippines in Camp Aguinaldo on Friday. GRIG C. MONTEGRANDE

If his critics had their way, President Benigno Aquino III’s love life—or lack of it—would be considered one of the grounds for impeachment, Akbayan Rep. Walden Bello said.

“Some people will find any excuse to try to impeach the President,” Bello said of recent moves by several party-list groups to impeach Mr. Aquino “for culpable violation of the Constitution and betrayal of public trust” in the Disbursement Acceleration Program (DAP), part of which the Supreme Court had declared “unconstitutional.”

The high court’s ruling sparked moves to impeach the President and to file charges against Budget Secretary Florencio Abad, for funding projects not listed in the national budget and for releasing the savings of the executive branch to other agencies.

Among the groups poised to endorse impeachment complaints against the President on Monday are Bayan Muna, the Bagong Alyansang Makabayan, and previous petitioners against the DAP including bishops, netizens and professionals.

On Tuesday, the group Youth Act Now will file its own impeachment complaint with the endorsement of the Kabataan party-list group.

Akbayan, which used to belong to progressive opposition groups in Congress but is now part of the House majority, poked fun at the President’s critics on Friday, suggesting that they would capitalize on any flimsy reason to try to remove him.

The 54-year-old Mr. Aquino is a bachelor whose dating activities are often the subject of gossip in media and political circles.

Two other impeachment complaints have already been filed against the President by lawyer Oliver Lozano and former Rep. Augusto Syjuco, though no lawmaker has yet come forward to endorse either complaint, a requirement for them to proceed to the plenary.

Bello said that Akbayan, some of whose members have secured key positions in the Aquino government, had been critical of the DAP since it first surfaced “as we felt it was fiscal overreach on the part of the executive.”

But, he added, Akbayan believed “that the President acted in good faith when he approved the DAP since spending on social services to stimulate the economy was necessary at the time.”

Bello, however, rebuked Mr. Aquino in an earlier statement for taking a hostile stance against the Supreme Court over its ruling, and asked the President and other parties involved in the row over the DAP to “desist from confrontational language.”

In a televised address on Monday, Mr. Aquino announced he would appeal the DAP ruling. At the same time, he warned the Supreme Court of a possible clash between the executive and the judiciary branches of government, and the need for the legislature to step in.

Bello said it was “the President’s right to file a motion for reconsideration. We expect, however, that the Supreme Court’s judgment … will be definitive.”

The Akbayan representative said the best way forward “is for Congress to pass budget reform bills that will definitively keep the power of the purse with Congress and clip the executive’s fiscal powers, thus preserving the separation of powers.”

On the resignation of the budget secretary over the DAP controversy which Mr. Aquino had rejected, Bello said it was up to (the President) “to decide and insist on, with appropriate attention to considerations of honor, decency and the future of this administration’s reform program. It is a hard decision, that is all I can say.”

Who will benefit most if Aquino is impeached? Cayetano has answer