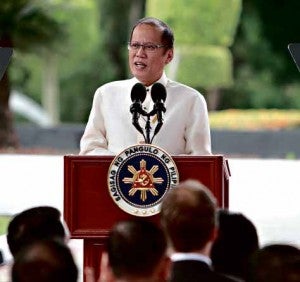 MANILA, Philippines – President Benigno Aquino III on Thursday vacillated on the issue of presidential term extension, saying the people should settle the issue while making known his openness to extending his six-year term, which ends in 2016.

In an interview with Bombo Radyo, Aquino said, “Sinabi ko naman noong una akong tumakbo hindi ako masokista. Pero at the same time, sabi ko nga makikinig ako sa anumang utos ng mga boss natin (When I first ran for President I said, I am no masochist. But at the same time, as I said, I will listen to whatever command my bosses give).” He calls the Filipino people his bosses.

Aquino said people had been approaching him expressing their wish that he continue serving the country beyond 2016.

“Isa pa hong termino (One more term)!” one supporter shouted when he inaugurated a road network in Cagayan. However, he said it was a “good thing” that the other people did not join in on the “spontaneous” call.

“Kailangan pa namin ho kayo. Marami pa hong kailangang gawin. Dapat ituloy na ho ninyo (We still need you. There are still a lot of things to do. You should continue),” she added.

Aquino said he found it difficult to answer her.

(So can I tell them…We have a limit. Our work is to find someone who will continue our reforms.

(How can you guarantee that they will continue what you had done.)

“Kailangang masagot ’yan (That needs to be answered),” Aquino said, referring to the issue on how the reforms that his administration had instituted could be continued after he steps down.

He admitted that he has been consulting with various sectors to address the issue.

Despite his earlier pronouncements, Aquino said he was still looking forward to 2016.

(One year and ten months from now, I think I will be with Usec. Marfil and Asec. Delantar on July 1, the day after I step down from office, and we will eat delicious food while there’s a streamer posted behind us with the word: freedom.)