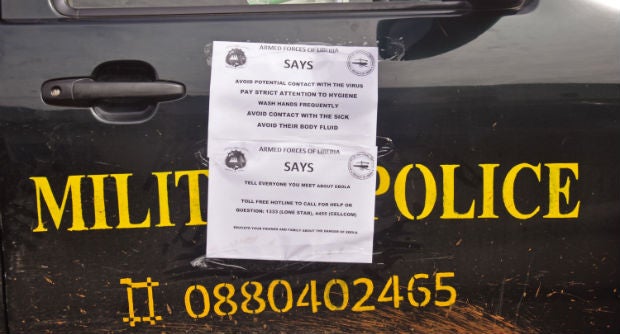 A Liberian military police truck with warnings on its side door, one reading ‘Tell Everyone You Meet About Ebola’ patrol through the streets to prevent panic by people over the Ebola virus in the city of Monrovia, Liberia, Friday, Aug. 1, 2014. AP

PARIS — France on Wednesday recommended that its citizens leave the African countries of Sierra Leone and Liberia because of the outbreak of Ebola there, and Air France temporarily suspended its three flights a week to Sierra Leone.

The disease has now killed more than 1,400 people in West Africa.

Air France announced that it temporarily halted its flights to Freetown, Sierra Leone because of the Ebola outbreak there and at the request of the French government.

The French national carrier said it is maintaining its flights to Conakry, Guinea, and to Lagos, Nigeria, cities it flies to once a day. Referring to Ebola, the airline said, “Measures in place at airports there “guarantee … that no passengers presenting symptoms … can board.”

The French government said the increasing spread of Ebola — notably in Liberia and Sierra Leone — prompted its request for suspension of Air France flights to Sierra Leone and its recommendation that French citizens leave Sierra Leone and Liberia.

Many regional and major airlines have suspended services to the three countries most affected by the Ebola outbreak: Liberia, Sierra Leone and Guinea. The United Nations has said the lack of flights is making it increasingly difficult to bring supplies to those countries. U.N. flights to bring humanitarian workers to Guinea, Liberia and Sierra Leone, also have faced restrictions.