No-fly zone seen in areas that Pope will visit 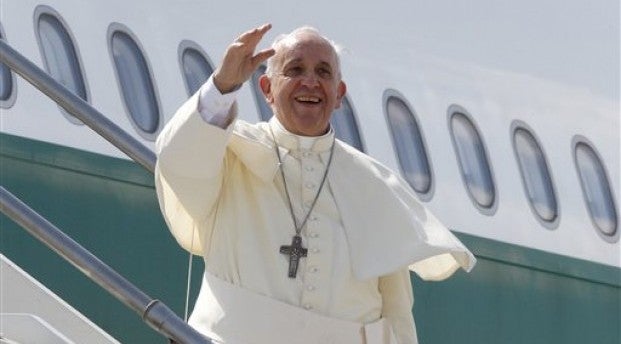 TACLOBAN CITY—The skies over this city and other areas to be visited by Pope Francis early next year may be off-limits to air traffic during the Pope’s visit, although civil aviation authorities said this was just a possibility now.

Efren Nagrama, area manager of the Civil Aviation Authority of the Philippines (CAAP), said whether or not there would be a no-fly zone here and other parts of Leyte  during the Pope’s visit would depend on what authorities in charge of the Pope’s security would recommend.

Archbishop John Du, of the Archdiocese of Palo in Leyte, had reported that Francis would be in the city on Jan. 17 next year and celebrate Mass at the airport.

The site of the Mass, if proposals are heeded, would be a four-hectare area at the Daniel Z. Romualdez (DZR) Airport which suffered damage during the onslaught of Supertyphoon “Yolanda” in November last year.

Nagrama, whose office has jurisdiction over the airport, said while the imposition of a no-fly zone around this city and other areas to be visited by Francis is still just a possibility, “I’m sure they (authorities in charge of papal security) are considering it.”

Francis is expected to be in Leyte for at most six hours. Other details of his itinerary have not been made public.

One certainty, Nagrama said, is that roads leading to the airport would be closed to all types of traffic during the papal Mass.

Fr. Amadeo Alvero, spokesperson of the Palo archdiocese, said a no-fly zone during the papal visit was welcome.

“If it is part of the security and safety of Pope Francis and the faithful who will welcome him, then it would be good to have a no-fly zone,” Alvero said.