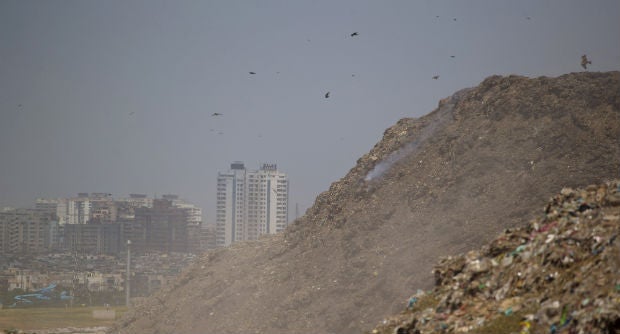 In this Tuesday, Aug. 26, 2014 photo, garbage set on fire slowly burn at a garbage dump on the outskirts of New Delhi, India. A new study shows that rampant trash-burning is releasing more polluting emissions than governments are reporting. The researchers estimate about 41 percent of the world’s garbage is burned in backyards, fields, dumps or incinerators. AP

• 40 percent of the world’s garbage is burned

• China, India have the most trash burned by residents

NEW DELHI — Rampant trash-burning is throwing more pollution and toxic particles into the air than governments are reporting, according to a scientific study estimating more than.

The study published Tuesday in the journal Environmental Science and Technology attempts the first comprehensive assessment of global trash-burning data, including carbon dioxide, carbon monoxide, mercury and tiny particulate matter that can dim the sun’s rays or clog human lungs.

“Doing this study made me realize how little information we really have about garbage burning and waste management,” said lead researcher Christine Wiedinmyer of the government-funded National Center for Atmospheric Research, in Boulder, Colorado. “What’s really interesting is all the toxins. We need to look further at that.”

It also presents the first country-by-country index of rough emissions estimates for both carbon dioxide and toxic pollutants linked to human disease, though researchers acknowledged the index is a “first draft” based on estimates and so some measures could be off by 20-50 percent.

“There is a lot of room for improvement in the index,” Wiedinmyer said, but expressed hope it would still help policy-makers set agendas to clear the air. “Most health regulations are based on the total mass of particles in the air, based on their size. But that’s not getting at what the particles are made of. That can have different health impacts as well as different impacts on the climate.”

While many governments tally emissions from incinerators, trash that is burned in backyards, fields and dumps is mostly unregulated and unreported.

Researchers pulled together existing data on population, per capita production of trash and official reports on waste disposal to calculate how much garbage is burned around the world each year. The answer: 41 percent of our global 2 billion-ton annual output goes up in flames.

China and India were found to have the most trash burned by residents, while China, Brazil and Mexico burned the most at garbage dumps.

Much of the world’s air pollution can be blamed on burning garbage, including discarded plastics, busted electronics, broken furniture and food scraps.

According to the study, 29 percent of global particulate matter called PM 2.5, which can penetrate deep into the lungs, comes from such fires, as well as 10 percent of toxic mercury emissions.

China’s trash-burning emissions, for example, are not reflected in official data for slightly larger PM10 particulate matter, though the study shows those emissions are equal to 20 percent of what’s reported.

The study also showed that global trash burning releases about 5 percent of the world’s man-made emissions of carbon dioxide, a potent greenhouse gas.

Many countries simply do not estimate carbon emissions from burning trash. Sri Lanka’s unreported carbon dioxide emissions from open burning alone are about equal to what it reports from all other activities, according to the study. Other small developing countries in Asia and Africa may be releasing more through burning.

Regulations and laws alone are often not enough to curb the practice.

In India, where burning trash is illegal, hundreds of thousands with no garbage pickup have no other choice for disposal. And as temperatures dip in winter, they often have few other options for keeping warm, and many spend their nights huddled around noxious blue flames coming off humble pyres of burning plastic bags, rubber tires and whatever else they can find handy to burn.

Scientists not affiliated with the study agreed the data needed to be treated with care, given the estimates made on both how much waste is generated per person in a country, and then how much of that is burned.

“Reliable estimates are hard to come by in developing countries. To estimate further the proportion of waste burned is pushing the envelope too hard,” said Prof. Arun K. Attri of Jawaharlal Nehru University’s School of Environmental Sciences.

However, the study was still useful for raising attention to the “emerging crisis humanity is already facing,” he said. “The findings should get the ears of individuals who frame the policies … Open burning of waste is harmful, and it is well known and does not require rocket science to understand.”

Butchaiah Gadde, from Thailand’s King Mongkut*s University of Technology, also cautioned against assuming all trash-burning emissions went unrecorded. “This may be true for some countries, but not for all,” he said.