PhilHealth coverage for all seniors sought 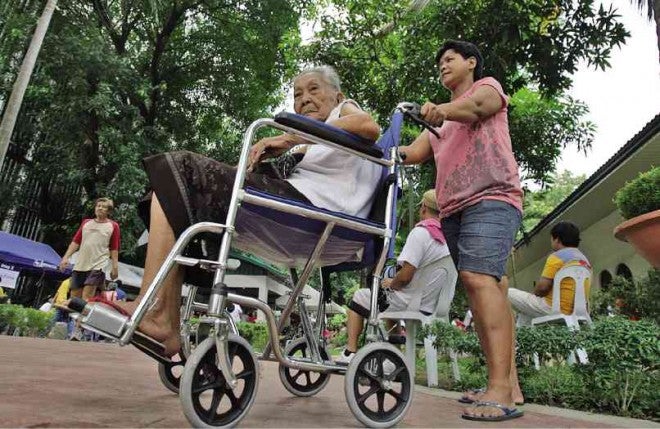 AN ELDERLY woman is on her way to a voter registration area set up by the Commission on Elections. A senior citizens’ rights advocate is calling for better deals for the elderly, like expanded health insurance coverage. NIÑO JESUS ORBETA

DAVAO CITY—A senior citizens’ rights advocate called on Congress to give priority to a legislation that would give free and full Philippine Health Insurance Corp. (PhilHealth) coverage for senior citizens.

In a statement, Benny Abante, who authored the Expanded Senior Citizens Act of 2010 when he was still a member of the House of Representatives, said he believed that full and free PhilHealth coverage for senior citizens was “viable despite concerns raised by PhilHealth officials regarding funding.”

Funding for the country’s growing number of senior citizens “should not be seen as a problem given that PhilHealth contributions will also be increasing over time as our labor force continues to grow together with our population.”

“With the county expected to be the world’s 16th biggest economy by 2050, PhilHealth need not worry about being unable to fund coverage for our country’s senior citizens,” Abante said.

He said that at present, PhilHealth only provided free coverage for indigent senior citizens.

The House had approved on second reading House Bill No. 4593, which is a consolidation of all the bills for mandatory PhilHealth coverage for all senior citizens.

Abante said the amendment would improve the law he pushed while he was in Congress, which currently extends PhilHealth coverage only to indigent senior citizens. Inquirer Mindanao