In Ifugao, a ritual after a bountiful rice harvest

COMMUNITY members of Hapao in Hungduan town in Ifugao province engage in a friendly competition of “guyyudan” (tug-of-war) as part of activities of the “punnuk” ritual to mark the end of the rice harvest season.

When the rice terraces in Hungduan town in Ifugao province turn from green to yellow, villagers start harvesting the ripened grains and hold a ritual to mark the end of the harvest season. The “punnuk,” a postharvest ritual, is performed by residents of Hapao, Baang and Nungulunan in Hungduan.

A day before the punnuk, a “houwah” (thanksgiving rite) is performed by the “mumbaki” (native priest), along with the reading of the bile of a chicken for good omen, and the offering of “bayah” (rice wine) to the gods and deities.

The next day, the punnuk is declared by a “dumupag,” a female agricultural leader who holds the social position and respect in the village.

“This signals that people can now be free to do other things that were earlier prohibited during the harvest ritual. For instance, no eating of fish or shells from the river, no eating of leafy vegetables from the terraces or planting in the gardens and other heavy manual tasks,” Uyammi says.

There is a belief that “Binongbong,” a deity from the Lagud (East), would declare the lifting of these prohibitions.

Jose Uyyami, a Hapao elder, says his ancestors have been observing the ritual for generations.

“As a child I actively participated in it and even until now. I am glad to see young people, and even my grandchildren, in the punnuk,” he says.

The punnuk was last performed in 1986 before the community revived it in 1997 through the help of Baguio-based filmmaker Kidlat Tahimik. 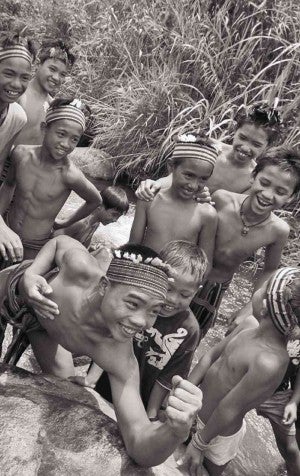 From the rice terraces, a group of children, teenagers, adults and elders lines up dressed in their native attire: The men in their “wanoh” (loincloth) with their “pongot” (headdress) and the women in their “tolge” (native skirt). They carry the “dongla,” the principal sacred plant of Ifugao, and the “kina’ag” (a monkey-like scarecrow made of rice stalks) in a procession heading to the nearby river.

As they walk down through the terraces, the participants and spectators cheer and challenge each other to play the “guyyudan” (tug-of-war).

The “pakid,” a long wooden pole with a hook, is pulled by each group from the opposite end. The players from each village are a mix of men and women, children and elders, with their bodies half-soaked and resisting the strong current of the river.

Rowena Nakake-Sicat, tourism officer of Hungduan, says: “Our ancestors believed that the winners of the game would have a bountiful supply of rice, while the loser would experience scarcity throughout the year.”

The guyyudan is also regarded as a form of entertainment for residents as they celebrate the lifting of the prohibitions at the end of the harvest season.

At the end of the guyyudan, villagers throw the kina’ag and then the dongla into the river to symbolize that all misfortunes, pests and sickness will be washed away.