Who is Dennis Roldan? 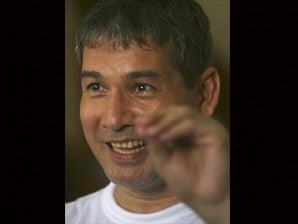 MANILA, Philippines—Former congressman and actor Dennis Roldan was found guilty by the Pasig Regional Court for the kidnapping of then three-year-old Chinese Kenshi Yu in 2005. The actor was sentenced to life imprisonment at the New Bilibid Prison in Muntinlupa City.

Here are the things that you need to know about the kidnapping case.

1. Dennis Roldan is the father of a teen actor and volleyball player.

On Tuesday morning, his children took to Twitter to express their support for their embattled father.

Roldan played for a short time for Ginebra and Gilbey’s Gin Tonic in 1983. After his basketball stint, he became a one-term congressman for the third district of Quezon City in 1992.

He has been a movie and TV actor since the 1980s. He appeared in films such as Kambal sa Uma, Hot Property, and 10,000 Hours. Roldan currently plays the role of Mateo Andrada in the GMA primetime drama show “My Destiny”.

3. Roldan was arrested in 2005 for kidnapping then three-year-old Kenshi Yu and was detained for a year.

On February 9, 2005, then three-year-old Kenshi Yu and his nanny were on their way to school when Yu was grabbed by several men in Pasig City. Yu was rescued 11 days later by forces of Police Anti-Crime Emergency Response Group (PACER) in a safe house in Cubao, Quezon City. On February 21, 2005, Roldan, along with six of his cohorts, was arrested.

According to written testimonies of their cohorts, Roldan and Suzette Wang, his girlfriend at that time, masterminded the kidnapping of the kid and demanded P200 million for the kid’s release.

Wang was a friend of the kidnap victim’s mother.

4. Roldan was able to post bail for his release in July 2006 for kidnapping which is a non-bailable offense.

Carpio later inhibited herself from the case.

Roldan was free since then.

Wang, however, remains at large and the police offered P300,000 for her capture.

In 2008, then six-year-old Yu positively identified Roldan as his captor.

5. While in jail, Roldan became a devout Christian and later served as a pastor.

Roldan, who was detained for a year, said that he was introduced to God’s words inside jail and decided to become a pastor for Jesus Christ the Life Giver Ministry International.

He then became a pastor for four months to Sarangani representative and boxing champion Manny Pacquiao and his wife Jinkee.

He also pledged to share the word of God to celebrities and politicians.