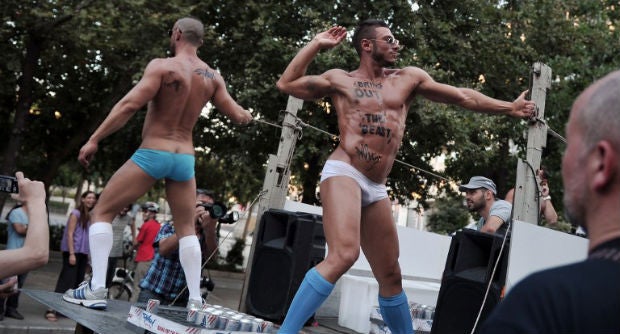 Men dance on the back of a truck during the Athens gay pride parade on June 8, 2013. Greek human rights groups condemned a rise in attacks on gays Monday, Aug. 25, 2014, after two young men were savagely beaten in Athens. AFP

The anti-racist alliance Keerfa blamed the far-right party Golden Dawn for mounting homophobic violence after two men were set upon by a dozen shaven-headed men in black T-shirts at the weekend.

The couple, aged 25 and 30, were sitting on a bench in the Pangrati district of the capital when two men on a motorcycle threw detergent on them, activists said.

A few minutes later they were set upon by a group of men in black T-shirts. One of the victims was badly beaten and had his leg broken, while his partner, an immigrant, was less seriously hurt, police said.

Supporters of Golden Dawn, which has 17 MPs in the Greek parliament although several are being held in custody, often stage vigilante patrols dressed in black T-shirts, and have been regularly accused of street violence.

“Racist and homophobic attacks are unacceptable,” Keerfa said in a statement. “We are not going to let the neo-Nazis of Golden Dawn sow their racist venom in our neighborhoods.”

Evangelia Vlami, of the Greek lesbian movement, told the Ta Nea daily that “behavior like this is on the rise, encouraged by the popularity of the extreme right.”

Gay rights activist Grigoris Valianatos denounced the disinterest of the police, who he says have not been trained to deal with hate crimes. “Some of the attackers are actually in the police,” he told the newspaper.

Saturday’s attack is the fifth in Athens in three months, although right groups claim many more are not reported to the police.

The main opposition party Syriza condemned the police for not arresting anyone after the latest attack.

“This incident shows the necessity to adopt an anti-hate law. Not having one only encourages attacks by the extreme right,” the party said in a statement.

Greece’s conservative government has again put back a parliamentary debate on a hate law, which has been shelved for 18 months, because of opposition to it from within Prime Minister Antonis Samaras’ New Democracy party.

The law aims to outlaw racist and homophobic attacks, targeting in particular Golden Dawn whose MPs have already been charged with being party of “criminal organization.”