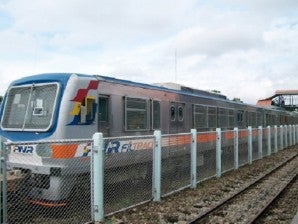 PNR spokesman Paul de Quiros said that no one among the 370 passengers was hurt when the last coach of the PNR train derailed between the España and Sta. Mesa stations at 9:21 a.m. Operations returned to normal at 10:50 a.m.

He clarified, however, that the accident did not result in a halt in operations as southbound trains were transferred to the northbound tracks to allow them to get around the derailed train.

De Quiros said that preliminary findings indicated that the wooden railroad tracks, a plank-shaped support that helps keep rails aligned, were damaged. He declined to give further details pending the results of a final report.

He noted that PNR had been replacing wooden railroad ties with more stable but expensive concrete ones. He said that most of the railroad ties used by PNR were already concrete but specific figures were not immediately available.

“There is wear-and-tear especially for the tracks and rail ties,” De Quiros said. “One reason is the increased number of trips so it may have overworked that portion.”

Earlier this month, a southbound train of the Metro Rail Transit-3 was derailed, sending almost 40 passengers to the hospital.

The Aug. 13 accident was caused by a loaded MRT train which stalled as it was approaching Taft Station in Pasay City. It was being pushed by another train when the coupler connecting the two broke, sending the stalled train smashing through the station barrier and onto the open street.

An investigation later showed that the incident was due to human error.

The PNR railway system, which starts at Tutuban station in Manila and extends as far as 60 kilometers to Laguna province, serves an average of 60,000 people per day, the PNR spokesman said.

It officially began operations on Nov. 24, 1892, as the Ferrocarril de Manila-Dagupan during the Spanish colonial period, later becoming the Manila Railroad Company during the American colonial period, according to information posted on its website. It eventually became the Philippine National Railways on June 20, 1964.

The PNR was once Luzon’s premier railway operator with over 797 kilometers linking La Union down to Bicol but decades of neglect and damage from natural calamities gradually slashed its coverage.

In a statement last month, the PNR said that it was reviving train services to Legaspi, Albay, next month.

De Quiros confirmed that the plan was “still a go as of the moment,” adding that a test run was conducted in late June.

The charter of PNR was extended last June 16 by virtue of the passage of Republic Act No. 10638 by Congress, which consolidated the present laws concerning the company. This will allow the agency to operate for another 50 years.–With Aries Joseph Hegina, INQUIRER.net