Makati gov’t to Trillanes: What corruption?

This was the response of the Makati government to Sen. Antonio Trillanes’ claim that corruption in Makati City was probably bigger than the P10-billion pork barrel scam.

“All transactions of the Makati City government undergo public bidding and other processes, as required by law. Likewise all transactions are audited by the Commission on Audit (COA),” said spokesperson Joey Salgado in a text message.

“While we respect the opinion of the senator, we feel that it is unfair and erroneous to make such a sweeping statement solely on the basis of a four-hour hearing where city officials were not given the opportunity to explain,” Salgado said. 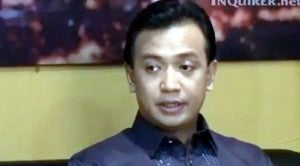 It was “likewise unfair and erroneous to totally accept the claims of local political detractors” who “have shown an inclination to make untruthful statements to the Senate blue ribbon committee,” he said.

“In particular, the false claim that our (birthday) cakes were purchased at P1,000 when official records show a purchase price of P306,” Salgado said.

Asked to comment on Trillanes’ claim that he had insider information that President Aquino would not endorse Vice President Jejomar Binay’s presidential candidacy, Salgado, who also acts as the Binay family’s spokesperson, said: “The VP has never sought or asked for the President’s endorsement.”

“[Binay’s] candidacy for president as standard-bearer of the United Nationalist Alliance is not dependent on such endorsement,” he said.

United Nationalist Alliance secretary general Toby Tiangco said Trillanes did not have the moral ascendancy to assail the character of Vice President Binay, as it was the senator whose record was blemished.

In a statement, Tiangco reminded Trillanes of his periods of “military adventurism” when the former junior Navy officer led the Oakwood mutiny in 2003 and the Manila Peninsula siege in 2008.

He contrasted this with Binay’s record as “an activist and human rights lawyer during martial law and a defender of the Constitution and the administration of former President Cory Aquino against military adventurists.”

“Who has gunpowder mentality? The Vice President or Senator Trillanes?” said Tiangco, who is also the Navotas representative.

He accused Trillanes of having a “messianic complex” and of “grandstanding” at the expense of his colleagues. “What does he want to suggest? That only he is the brave one in the Senate?” he said.

Tiangco said Trillanes’ partiality for  Binay’s accusers became obvious when he, along with Sen. Alan Peter Cayetano, “acted as their lawyers” during the Senate hearing on the alleged overpricing of Makati City Hall Parking Building 2.

He said it was not true that the hearing strengthened the complaint against the Vice President.

“What the hearing showed was that the detractors of the Vice President used the Senate to malign the Binay family by resorting to name-calling and bringing out baseless, unsubstantiated and false allegations,” Tiangco said.

He said Trillanes and Cayetano acted as bullies when they interrogated Binay’s son, Makati Mayor Junjun Binay, and officials and the technical employees of the COA who, on orders from the COA central office, investigated and submitted a report saying there was no overpricing in the project.

“Because he did not like the answers of the technical officials who conducted the actual inspection that found there was no overprice, he bullied them and he wanted to force them to say there was overprice. The technical team has the technical expertise here, and it is mandated by law to do its job,” Tiangco said.

Tiangco cited the claim of overpriced birthday cakes for senior citizens by one of Binay’s accusers, lawyer Renato Bondal.

“Renato Bondal tried to inject drama into the hearing by bringing out several cakes and claiming the Makati cake was priced at P1,000. But the city government debunked this allegation and showed to the media purchase orders showing that the cakes were bought at P306 each,” he said.

“Isn’t that deception and lying? Didn’t these people take an oath to tell the truth during the hearing? But I don’t think Trillanes and Cayetano will sanction them because these senators are obviously their coaches and lawyers,” he said.

“Isn’t that proof that they [Trillanes and Bondal] are close? How can he be impartial if he can tell Bondal who will be included and excluded from the case. This proves he is among those responsible for this case,” Tiangco said.

‘Probing Makati overprice not over’