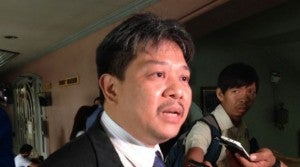 MANILA, Philippines — There is nothing wrong with housing non-government organizations (NGOs) for poor farmers in residential houses and garages, according to lawyer of detained businesswoman Janet Lim-Napoles.

In an interview, Stephen David said what would be problematic is if these foundations that were linked to Napoles were housed in posh condominium units.

He said this would defeat the purpose of helping marginalized members of society like farmers.

David is reacting to Commission on Audit (COA) assistant commissioner Susan Garcia’s claims during Napoles’ bail hearing on Friday when she said that the foundations linked to Napoles were housed in bogus locations such as residential areas and garages.

The COA special audit report on the lawmakers’ Priority Development Assistance Funds (PDAF) has noted that these spurious NGOs only held offices in residential areas.

Scam whistleblowers have testified that they were appointed as heads of these NGOs at the behest of Napoles.

“Wala naman sa batas na nagbabawal ‘nun. Mas magdududa ako pag nasa condominium ang NGO (There is nothing in the law that prohibits it. It would be more suspicious if an NGO is housed in a condominium),” David said after his client’s bail hearing from plunder at the Sandiganbayan.

David said even starting lawyers housed their offices in residential places because maintaining an office space was too expensive.

(Why do you expect them to have offices? These are mere conduits. They only earn one percent from a project),” David said.

Napoles is accused of masterminding the scam involving the use of lawmakers’ public funds for ghost projects. Detained for plunder were Senators Ramon Revilla Jr. and Jose “Jinggoy” Estrada, as well as aides Richard Cambe and Gigi Reyes. Senator Juan Ponce Enrile, meanwhile, is in the hospital under police custody pending his motion for hospital arrest.