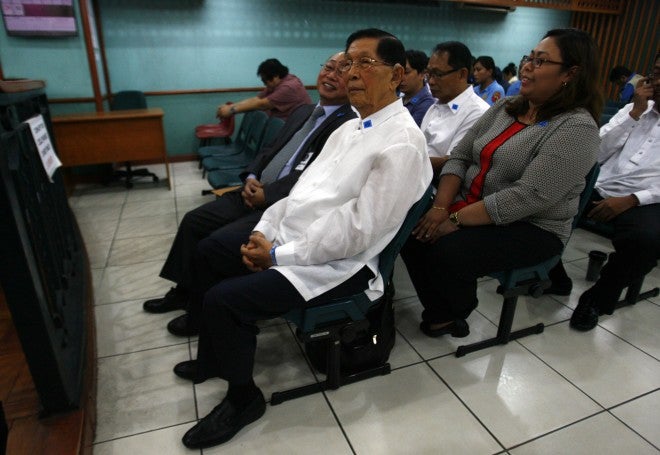 The funds were endorsed to Napoles’ non-government organizations and not to the departments and their attached agencies, Garcia said.

Garcia said Enrile and his representatives confirmed that their signatures on the nine Saros were authentic.

She said Enrile only denied signing a certificate of acceptance for a project and a separate list of beneficiaries for a PDAF-funded project.

Garcia cited as a red flag the practice of endorsing the PDAF projects to NGOs not authorized in the budget law.

“The release to the NGOs is not in accordance with existing rules and regulations,” Garcia said.

Garcia added that Enrile and his representatives were the ones who requested the Saro from the DBM. She said the practice should be for the authorized implementing agencies to request for the Saro.

Third division chairperson and Sandiganbayan Presiding Justice Amparo Cabotaje-Tang questioned why nobody raised a red flag on the practice of legislators rubbing elbows with the budget department.

“Why did no one ever question that practice? How long has this been [going on]?” Tang asked Garcia, who answered that as far as their audit was concerned, Enrile and his aides had been going to the DBM from 2004 to 2010.

Alleged mastermind Napoles was present in the hearing. At that point, Napoles’ head was bowed while holding her rosary.

Garcia said they validated six of the NGOs linked to Napoles and found that they were located in bogus locations such as garages and residential houses.

Napoles is accused of masterminding the scam of pillaging lawmakers’ public funds to ghost projects for kickbacks. Detained for plunder are Senators Ramon “Bong” Revilla Jr. and Jose “Jinggoy” Estrada, as well as aides Richard Cambe and Gigi Reyes. Senator Enrile, meanwhile, is in the hospital under police custody pending his motion for hospital arrest.
RELATED STORIES