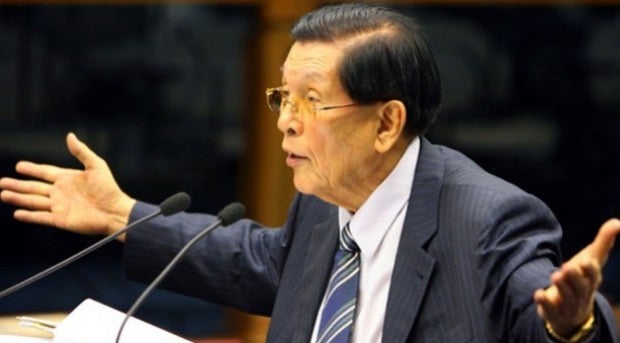 Testifying for the prosecution before the antigraft court’s Third Division during a hearing of a petition for bail filed by Napoles, COA Assistant Commissioner Susan Garcia said the documents the COA examined showed that the Department of Budget and Management had issued nine special allotment release orders (Saros) to Enrile from 2007 to 2009.

She said the audit conducted on Enrile’s PDAF was part of a special audit, which was carried out in 2010 by a team of state auditors, on the pork barrel allotments of more than 100 senators and congressmen on the orders of then COA Chair Reynaldo Villar.

“The projects were done not in accordance with existing rules and regulations. The memoranda of agreement for the projects had no legal basis,” Garcia testified during direct examination by special prosecutor Annie Cabelis.

“All the nine Saros were not covered by endorsement letters and project proposals by the implementing agencies,” Garcia said.

She also noted that the programs financed by Enrile’s pork barrel were not identified in the General Appropriations Act, or the approved national budget, for the year  they were implemented, which she said was clearly in violation of the law.

In addition, Garcia said, the projects of the Napoles foundations violated Resolution No. 12-2007 of the Government Procurement Policy Board (GPPB).

The resolution reiterates the policies stipulated in Republic Act No. 9184, or the Government Procurement Act, requiring public bidding in the participation of NGOs in projects financed by public funds and in the procurement of supplies purchased by the NGOs.

Napoles, who is now detained at Camp Bagong Diwa in Bicutan, Taguig, is accused of masterminding the diversion of congressional pork barrel into her bogus foundations and ghost projects, with the alleged participation of certain lawmakers, including three senators—Enrile, Jinggoy Estrada and Bong Revilla—who are now in detention.

Enrile, who is accused of pocketing about P173 million of his pork barrel allocations, is being held at Philippine National Police General Hospital in Camp Crame, Quezon City.

“As a guideline set by the GPPB, the NGOs should have been selected through public bidding or negotiated contracts,” Garcia said.

In the case of Enrile, she said, the legislator through his then chief of staff Gigi Reyes arbitrarily assigned the Napoles NGOs or foundations as project implementers.

Citing the documents that Reyes had furnished the DBM, Garcia said Enrile had authorized his former deputy chief of staff, Jose Antonio Evangelista, to deal directly with the Napoles foundations.

Moreover, she said, the “legal and physical existence of the NGOs as well as the suppliers” of the livelihood kits were all “questionable.”

“Many of the beneficiaries also denied receiving the livelihood packages and signing distribution receipts,” she said.

According to Garcia, the projects financed by Enrile’s pork barrel were carried out through three state agencies—the Technological Resource Center, the National Livelihood Development Corp. and the National Agribusiness Corp.—that served as conduits for the funds.

Replying to questions from Associate Justice Samuel Martires, Garcia said the documents the NGOs submitted did not specify what kind of projects they actually carried out using public funds.

She said the liquidation reports of the Enrile-sponsored projects mentioned only livelihood packages that cost at least P33,000 each.

The COA audit team based its conclusions on the various official documents covering the projects, such as the vouchers, Securities and Exchange Commission registrations and memoranda of agreement between the NGOs, Enrile’s office and the implementing agencies.

In one of the projects, Garcia said, 1,159 “agricultural packages” costing more than P38 million were distributed to beneficiaries in three municipalities in the provinces of Marinduque, La Union and Compostela Valley.

Primary whistle-blower Benhur Luy earlier testified that the legislators received 50 percent of the total budget of each project as “rebates,” or kickbacks.

Stephen David, one of Napoles’ lawyers, tried to have some of Garcia’s testimony on the legality of the projects stricken out, arguing that they were just based on her opinion.

However, Martires quickly overruled this objection, saying it was up to the court to weigh Garcia’s testimony.

Martires, who provided some relief from the dullness of the legal proceedings with his sporadic witty comments and interrogation of witnesses, said the content of the GPPB resolution “made my mind more confused.”

When Garcia said it should be identified as “goods,” Martires quipped: “How I wish the Sandiganbayan will be abolished because there will be no graft charges which will be filed.”

“But there will be corruption as long as the laws are itself not clear,” he said.

Under questioning by Presiding Justice Amparo Cabotaje Tang, the division chair, Garcia maintained that the COA audit team did not focus their investigation just on the pork barrel allocations of Enrile and the two other detained senators.

“We did not zero in on them. The audit covered the PDAF of more than 100 legislators…. But we audited the projects based on the materiality of the amounts or those which received the biggest allocations,” she said.

Associate Justice Alex Quiroz also asked Garcia whether the audit team tried to ascertain if the funds  transferred to the NGOs went to an account owned by one person.

“Did it occur to your mind that the checks actually went to just one account number?” Quiroz asked.

Garcia said the COA encountered difficulties in securing the financial records of the transactions of Napoles’ NGOs.

Even the state-owned Land Bank of the Philippines, one of the government’s official depository banks, gave them the runaround when the COA auditors asked for copies of the checks issued to the foundations, she said.

“It’s difficult to identify the real owner of the bank accounts. But we were able to get the names of the individuals who received the checks,” she said.

Read Next
US aircraft strike Islamic State artillery in Iraq–Pentagon
EDITORS' PICK
Look Through: Super Typhoon Karding barrels through parts of Philippines
Do all the things you do, faster
POGOs not linked to Illegal online gaming, says Pagcor
House energy committee chair Arroyo bats for cheap electricity
Metro Manila now at moderate risk for COVID-19 — DOH
Motorcycles, smartphones, and cash prizes up for grabs in TNT’s ‘Tuloy Ang Saya’ Raffle in Mindanao
MOST READ
Robredo supporter tackles elephant in room: No massive fraud in 2022 polls, surveys were just right
Comelec invalidates win of sitting governor in Negros Oriental
‘Shopee’ trends on Twitter after Toni Gonzaga becomes its new endorser
DepEd: We are in a crisis situation in education sector
Don't miss out on the latest news and information.