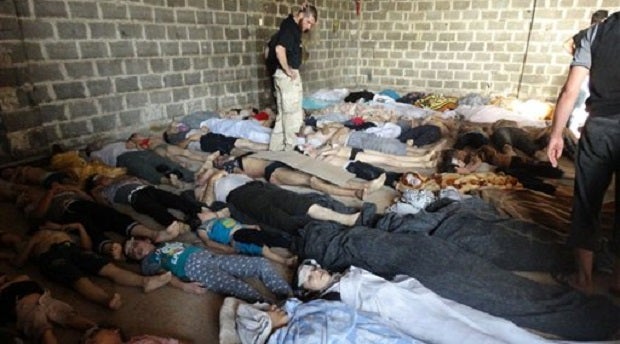 This Wednesday, Aug. 21, 2013 file image made available on Thursday, Aug. 22, by Shaam News Network, which has been authenticated based on its contents and other AP reporting, purports to show bodies after an attack on Ghouta, Syria. One year after the deadly chemical attack on rebel-held areas outside Damascus, the victims and their families have yet to see those behind the mass killings held responsible, a human rights group said Thursday, Aug. 21, 2014. AP/Shaam News Network

GENEVA, Switzerland — The death toll from Syria’s civil war has risen to more than 191,000 people killed between March 2011 and April 2014, the United Nations reported Friday.

The figure is the first issued by the U.N.’s human rights office since July 2013, when it documented more than 100,000 killed.

The U.N.’s top human rights official, Navi Pillay, who oversees the Geneva-based office, said the new figures are so much higher because they include additional killings from earlier periods, as well as deaths since the last report. The exact figure of confirmed deaths is 191,369, Pillay said.

“As the report explains, tragically it is probably an underestimate of the real total number of people killed during the first three years of this murderous conflict,” she said.

Pillay, the U.N. high commissioner for human rights, criticized the world’s “paralysis” over the fighting in Syria, which “has dropped off the international radar” in the face of so many other armed conflicts around the world.

In January, Pillay’s office said it had stopped updating the death toll, blaming the organization’s lack of access on the ground in Syria and its inability to verify source material. It was unclear why it has released new figures now.

The U.N. also would not endorse anyone else’s count, including the widely quoted figures from the Britain-based Syrian Observatory for Human Rights, which has closely counted the deaths since Syria’s crisis began in March 2011. On Thursday, that body said the number of deaths has reached 180,000.

US mission to rescue hostages in Syria failed