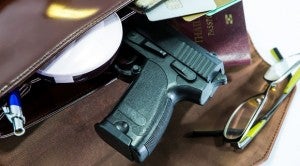 MANILA, Philippines—An armed woman who was looking for President Benigno Aquino was arrested after she tried to get past Malacañang security Friday afternoon, a Palace spokesman said.

Members of the Presidential Security Group arrested Flora Pineda at 3:45 p.m. after trying to get through gate 3 of the New Executive Building in Malacanang, Executive Secretary Edwin Lacierda said.

Lacierda said the woman was armed with a fully loaded calibre 45 gun and was looking for Aquino.

Members of the PSG blocked Pineda at the gate but she resisted, Lacierda said.

The agitated woman shouted that Aquino must be ousted because he was not responsive to the needs of the poor, especially the scavengers.

Pineda was a native of Tuguegarao in Cagayan but was residing in FTI in Taguig City.

Lacierda said no one was hurt during the incident.