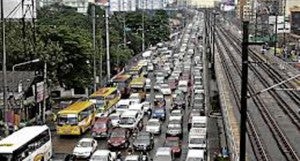 MANILA, Philippines—Traffic on Epifanio delos Santos Avenue (Edsa) will not be free yet of 556 out-of-line provincial buses.

This was after the opening of bus terminals in Alabang Metropolitan Manila Development Authority (MMDA) and Land Transportation Franchising and Regulatory Board (LTFRB) agreed to set up on Wednesday for more than 500 public utility buses was moved to next week.

“Ang agreement to implement the provisional traffic plan will take effect next week, August 27,” Muntinlupa Mayor Jaime Fresnedi said in a statement after he met with representatives of the LTFRB, MMDA, Filinvest Corporation, and Manila Toll Expressway System, Inc. in a closed-door meeting on Wednesday.

But the local official said the traffic plan is still provisional.

“As this new traffic plan develops, the local government of Muntinlupa will monitor the effect in its traffic for a month. Withdrawal from this management plan depends on the result to Muntinlupa’s traffic,” he said.

This move will limit the buses only until Alabang, preventing them from plying Edsa. But it was suspended for agencies to discuss further the proposal.

The city government said they will have to wait for the list of registered bus operators MMDA and LTFRB will provide before they could fully carry out the implementation.

The list is for the MMDA’s tagging system, where buses are given stickers that will let authorities easily identify colorum buses travelling beyond their regular route.

In this case, the 556 buses with stickers travelling from the South Luzon Expressway (Slex) will detour to the Filinvest exit going to the temporary terminal in South Station instead of taking the Alabang viaduct exit.

“Only buses with temporary stickers from MMDA and LTFRB will be allowed to unload and load passengers in the South Station Terminal,” Fresnedi said.