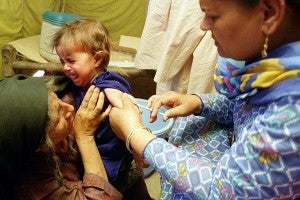 MANILA, Philippines–The Department of Health (DOH) is urging parents across the country to bring their children aged 5 and below to health centers next month for a supplemental measles and rubella vaccination in a bid to prevent outbreaks of the disease.

At a press briefing on Tuesday, Undersecretary Janette Garin said the DOH was allotting the entire month of September to give roughly 11 million children aged 9 months old to 5 years old extra protection against measles and rubella following observation that coverage of the vaccination against the highly infectious diseases was poor in 2011, which led to an outbreak starting last year.

Citing records from the DOH, Garin said the health agency had the most effective campaign against measles in 2004 with vaccination coverage of 95 percent. From 2005 to 2009, the incidence of measles was only between .1 and 16 per million population.

But in 2011, the incidence climbed to 68.8 per million population with vaccination coverage at 84 percent.