Art school still in the dark after ‘Glenda’ 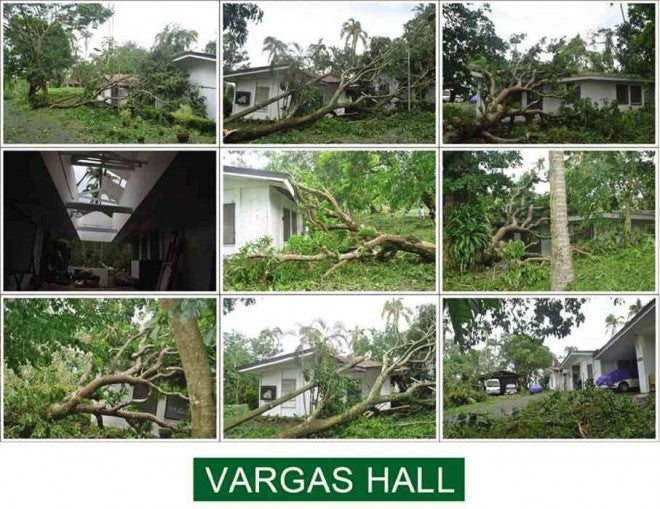 FALLEN trees and toppled electric posts on Mount Makiling leave students of Philippine High School for the Arts in Los Baños, Laguna province, reeling in the dark since Typhoon “Glenda” struck on July 16. The government art school is seeking donations from the school’s alumni, artists’ groups and private individuals for the immediate repair of the facilities. PHOTOS COURTESY OF PHILIPPINE HIGH SCHOOL FOR THE ARTS

LOS BAÑOS, Laguna—The country’s state-run high school for young talented artists has had to operate on a generator set and solar panels, a month after Typhoon “Glenda” (international name: Rammasun) knocked down power lines, resulting in a massive power outage in Luzon.

But while electricity was restored in most parts after the storm, Victor Emmanuel Carmelo “Vim” Nadera Jr., director of Philippine National High School for the Arts (PHSA), said their dire situation might persist for another seven months based on the school’s talks with power distributor Manila Electric Co. (Meralco).

The power lines at PHSA, located atop Mount Makiling in this town, were connected to those of the Boy Scouts of the Philippines (BSP), whose facilities are also on Makiling. Twenty-seven electric posts in the BSP compound were knocked down by the typhoon.

Classes at PHSA resumed on Aug. 3 after a three-week suspension, Nadera said. He said a parent of one of the students donated P100,000, which they used to buy a generator set.

“A problem [with the generator set] is the noise and that we are spending P5,000 a day for fuel consumption,” Nadera said in a phone interview on Sunday.

The school also bought seven solar panels but needs 23 more to power up the classrooms and the students’ dormitories at night. Each 30-watt solar power system, based on the school’s quotation, costs P7,800, without the delivery and installation charges.

Aside from the “power crisis,” Nadera said, the school needed P1 million to repair the damage on the school’s clubhouse, its folk dance and visual arts studios, dormitories and the National Arts Center Theater, also called the Teatro Mariang Makiling.

He said that in 2012, there was a proposal to have power connection independent from the BSP but it would cost P2.2 million.

Nadera added that when they inquired about it again, they were told it would now cost P20 million because different materials would be used for the installation of the power lines.

PHSA, established in June 1977, receives an annual budget through the Department of Education (DepEd). For the 2015 national budget, the school had proposed a P132-million allocation, intended mostly for the rehabilitation and maintenance of its facilities. The school currently trains and houses 137 art scholars.

Nadera said Education Secretary Armin Luistro already pledged help for PHSA but DepEd funds had to go first to other priority areas hit by the typhoon.

He said he never thought he would find himself writing solicitation letters to each of the 50 richest Filipinos named by Forbes magazine. “Only one, so far, replied,” Nadera said.