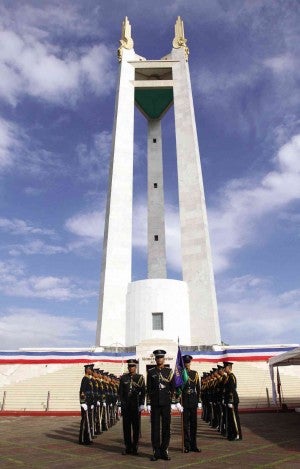 MANILA, Philippines–A garden city that fosters social mobility for the working class. This was how then President Manuel Luis Quezon envisioned the city he founded in 1938 to become the country’s capital.

Decades later, however, Quezon City Mayor Herbert Bautista admitted in jest that the late President “would probably scold us” upon seeing how his dream city turned out to be.

The local government marked the 136th birth anniversary of its founding father Tuesday with tributes to the wartime president, who sowed the seeds of the city with the purchase of 1,529 hectares of land from the Tuason family through the People’s Homesite Corp., precursor of the National Housing Authority.

Bautista said the stretch of Quezon Avenue, from Welcome rotunda to Quezon Memorial Circle, was supposed to be lined with trees in keeping with the late President’s dream. “We’re still pushing for it (city-wide greening),” he said.

“Let us not forget that this city was built for middle-class workers. It’s a place born out of what we call social mobility,” according to Michael Tan, chancellor of the University of the Philippines in Diliman, the guest speaker at the rites held at Quezon Memorial Circle.

Tan recalled that the Quezon administration provided a low-cost housing program for workers in what is now the Kamuning area, and allotted up to 480 hectares merging urbanization with greenery in the area now bordered by North, East and West Triangles and Timog Avenue.

“If he were alive and visited his beloved city today, what would he say (about the) streets named after cars and cigarettes?” Tan said. “What would he say if he noticed the urban poor, including those in UP Diliman?”

Stressing that Quezon’s principles should continue to guide the city’s development, Tan said UP is currently coordinating with the local government regarding the city’s 75th anniversary celebration on Oct. 12.

Evacuated to the United States to head a government-in-exile during World War II, Quezon died of tuberculosis in the US in 1944.

His plan to replace Manila as the nation’s capital was later revived, until President Ferdinand Marcos made it part of what is now Metro Manila.