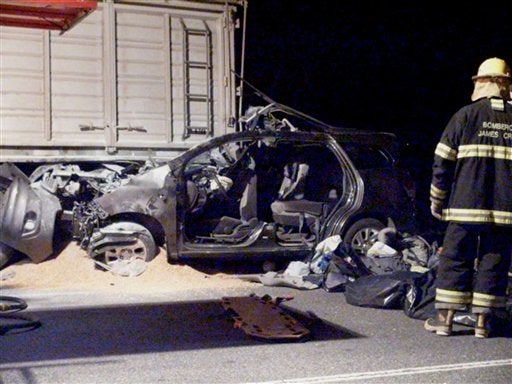 Firefighters inspect the car of Emanuel Bergoglio, nephew to Pope Francis, which crashed with a truck in James Craik, Argentina, early Tuesday, Aug. 19, 2014. Emanuel Bergoglio was seriously wounded as two young great-nephews of Pope Francis as well as their mother, the wife of the pope’s nephew, were killed in the crash, according to the Vatican and a local police official. AP

BUENOS AIRES, Argentina — Three relatives of Pope Francis died and a fourth was in critical condition Tuesday after a car crash on a provincial highway in Argentina, the Vatican and a local police official said.

The small car carrying a nephew of the pope along with the man’s wife and two young children slammed into the back of a truck, said Highway Police Superintendent Jorge Raineri. The crash killed the wife and children, one 2 years old and the other 8 months.

Photos showed the passenger side of the car smashed and crumpled beneath the cargo truck.

Emanuel Bergoglio, the 38-year-old son of a brother of Pope Francis, was hospitalized. He suffered extensive injuries and his condition was not considered stable, said Ignacio Bruno, an assistant director of the hospital in the town of Villa Maria, to Todo Noticias television.

The accident occurred between the cities of Rosario and Cordoba, apparently as the family was returning to Buenos Aires following a holiday weekend. The driver of the truck was not injured.

Vatican spokesman the Rev. Federico Lombardi said “the pope was informed about the tragic accident. He is deeply pained.” He added the pope asks “all who share in his grief to unite with him in prayer.”