WHO says Ebola has killed more than 1,200 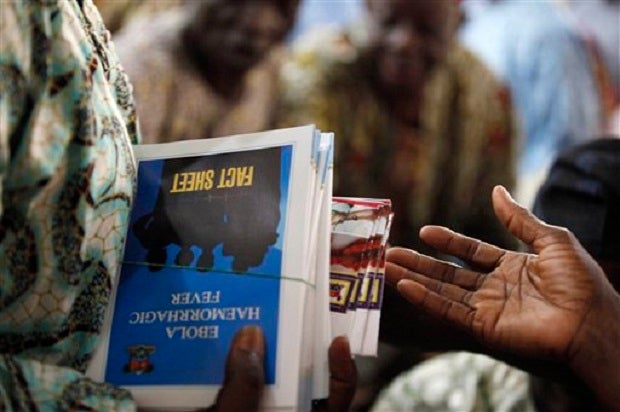 Fact sheets for the Ebola virus are distributed during an awareness campaign in Lagos, Nigeria, Friday, Aug. 15, 2014. The Ebola outbreak that has killed more than 1,000 people in West Africa could last another six months, Doctors Without Borders said Friday, and an aid worker acknowledged that the true death toll is unknown. Meanwhile, new figures released by the World Health Organization showed that Liberia has recorded more deaths — 413 — than any of the other affected countries. AP/Sunday Alamba

The World Health Organization says the death toll has risen to 1,229 from among the 2,240 reported cases in Guinea, Liberia, Nigeria and Sierra Leone.

The latest figures Tuesday include 84 additional deaths from 113 new cases reported between August 14 and 16.

Agency officials warned that measures to restrict travel in heavily infected areas, including quarantines of whole villages and counties, are limiting access to food in many cases.
RELATED STORIES: