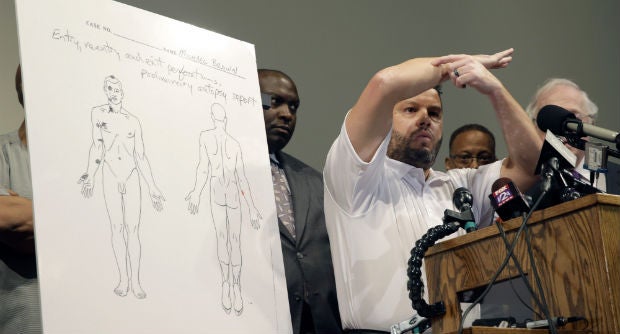 FERGUSON, Missouri — President Barack Obama said he was sending his attorney general to meet with U.S. law enforcement authorities investigating the fatal shooting by police of an unarmed 18-year-old black man, who suffered a bullet wound to his right arm that may have occurred when he put his hands up or when his back was turned to the shooter, according to a pathologist hired by the teen’s family said Monday.

But the pathologist said the independent team that examined Michael Brown can’t be sure yet exactly how the wounds were inflicted, citing the need for more information.

The autopsy determined that he was shot at least six times, including twice in the head, according to the pathologists and the family’s attorneys. Another autopsy conducted by St. Louis County also found Brown was shot six to eight times, and that he was hit in the head and chest.

In Washington, Obama said in a news conference that Attorney General Eric Holder to Ferguson would arrive Wednesday in Ferguson.

The Aug. 9 shooting touched off rancorous protests in Ferguson, a St. Louis suburb where police have used riot gear and tear gas. Gov. Jay Nixon ordered the National Guard to Ferguson to restore order Monday, while lifting a midnight-to-5 a.m. curfew that had been in place for two days.

Obama said he told Nixon he wanted to ensure the use of National Guard reservists to help calm tensions must be limited in scope, and said he would be monitoring that operation in the coming days to see whether the guard’s involvement was helping or hurting.

Brown’s death heightened racial tensions between the predominantly black community and the mostly white Ferguson Police Department. Civil rights activists have compared the shooting to other racially charged cases, especially the 2012 death of Trayvon Martin, the unarmed black teenager shot by Florida neighborhood watch organizer who was later acquitted of murder. Both cases have fueled nationwide debates on the treatment of young black men in America.

Police have said little about the encounter between Brown and the white officer, except to say that it involved a scuffle in which the officer was injured and Brown was shot. Witnesses say the teenager had his hands in the air as the officer fired multiple rounds.

Forensic pathologist Shawn Parcells, who assisted former New York City chief medical examiner Dr. Michael Baden during the independent autopsy, said a graze wound on Brown’s right arm could have occurred in several ways. The teen may have had his back to the shooter, or he could have been facing the shooter with his hands above his head or in a defensive position in front of his face.

“But we don’t know,” Parcells said.

Baden said one of the bullets entered the top of Brown’s skull, suggesting his head was bent forward when he suffered the fatal injury. The pathologists said Brown, who also was shot four times in the right arm, could have survived the other bullet wounds.

Suzanne McCune, the administrator of the St. Louis County medical examiner’s office, said the county’s autopsy found Brown was hit in the head and chest but she would not confirm whether he was hit elsewhere on his body. Full findings of the county’s autopsy aren’t expected for about two weeks.

Family attorney Benjamin Crump said the family wanted the additional autopsy because they feared results of the county’s examination could be biased. Crump declined to release copies of the report to the media.

“They could not trust what was going to be put in the reports about the tragic execution of their child,” he said during Monday’s news conference with Parcells and Baden. “It verifies that the witness accounts were true: that he was shot multiple times.”

He said Brown’s mother “had the question any mother would have: Was my child in pain. Dr. Baden shared with her in his opinion, he did not suffer.” He also noted that Brown had abrasions on his face from where he fell to the ground, but “otherwise no evidence of a struggle.”

Baden said there was no gun-power residue on Brown’s body, indicating he was not shot at close range. However, Baden said he did not have access to Brown’s clothing, and that it was possible the residue could be on the clothing.

A grand jury could begin hearing evidence Wednesday to determine whether the officer, Darren Wilson, should be charged in Brown’s death.

The U.S. Justice Department already had deepened its civil rights investigation into the shooting. A day earlier, officials said 40 FBI agents were going door-to-door gathering information in the neighborhood where Brown was shot.

Holder has ordered a federal medical examiner to perform another autopsy.

Obama, during a brief pause in his summer vacation, said Holder would meet with FBI and other officials carrying out an independent federal investigation.

The president expressed sympathy for the “passions and anger” sparked by the death of Brown, but said giving in to that anger through looting and attacks on police only stirs tensions and leads to further chaos. He said overcoming the mistrust endemic between many communities and their local police would require Americans to “listen and not just shout.”

“That’s how we’re going to move forward together, by trying to unite each other and understand each other and not simply divide ourselves from one another,” Obama told reporters at the White House. “We’re going to have to hold tight to those values.”