Palace spurns lawmaker’s challenge for Aquino to ride MRT, maintains it is safe 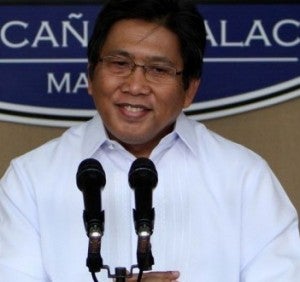 MANILA, Philippines– Malacañang on Monday rejected a lawmaker’s challenge for President Benigno Aquino III to ride the Metro Rail Transit (MRT) as it maintained that the MRT is safe for anyone who is riding it.

Presidential Communications Operations Office Secretary Herminio “Sonny” Coloma Jr. maintained that the main priority of the government is to ensure the safety of anyone who will ride the MRT.

Isabela Rep.  Rodito Albano challenged Aquino Monday to ride the MRT in order to know firsthand the “suffering ” of his “bosses.”

Albano also said that Aquino should ride the MRT in order to repair “the messy state of affairs at the MRT” and exact accountability for the “dismal and totally unacceptable” management of the MRT.

Coloma also spurned calls exacting accountability from officials of MRT and Department of Transportation and Communications (DOTC) involved in the train mishap last week, which injured 38 passengers. He stated that ensuring the safety of the commuter train is the main responsibility of these officials and that they have faithfully done this duty.

(Demanding accountability from the officials is being considered and we are saying that their main responsibility is to ensure the safety of the citizens and the passengers of the MRT.)