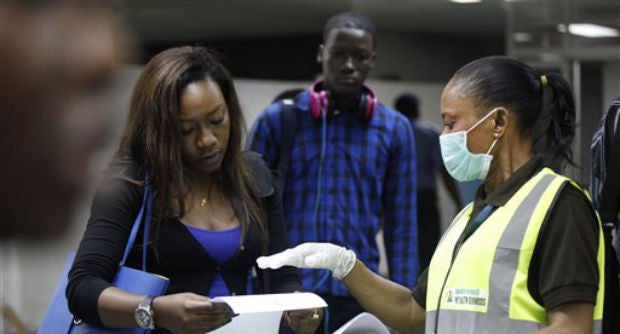 A Nigerian port health official speaks to a passenger at the arrivals hall of Murtala Muhammed International Airport in Lagos, Nigeria, Wednesday Aug. 6, 2014. A Nigerian nurse who treated a man with Ebola is now dead and five others are sick with one of the world’s most virulent diseases, authorities said Wednesday as the death toll rose to at least 932 people in four West African countries. AP

The health authority in the emirate said in a statement carried by the Emirati state news agency WAM on Sunday evening that the 35-year-old woman was traveling from Nigeria to India for treatment of advanced metastatic cancer.

Her health deteriorated while in transit at Abu Dhabi International Airport and as medics were trying to resuscitate her, they found signs that suggested a possible Ebola virus infection.

The woman’s husband, who was the only person sitting next to her on the plane, as well as five medics who treated her are being isolated pending test results on the deceased woman. All are in good health and show no symptoms of the illness, according to health officials.

An Ebola outbreak has killed more than 1,100 people, mostly in the three West African countries of Guinea, Liberia and Sierra Leone, according to WHO figures. Four people have died after contracting the disease in Nigeria, Africa’s most populous country.

The Ebola virus is typically transmitted through direct person-to-person contact or through contact with bodily secretions from an infected person. The WHO considers the risk to passengers traveling on a flight with an infected person to be “very low.”

Abu Dhabi is the capital and largest of seven sheikdoms that make up the United Arab Emirates. The country has grown into a major long-haul aviation hub. It is home to Dubai-based Emirates, the Middle East’s largest airline, and Abu Dhabi-based Etihad Airways.

Emirates earlier this month became the first carrier to halt flights to Guinea because of concerns about the spread of the Ebola virus there.

OFWs in Nigeria ‘more concerned’ on job stability than Ebola

There’ll be no stopping Ebola spread in PH, says expert